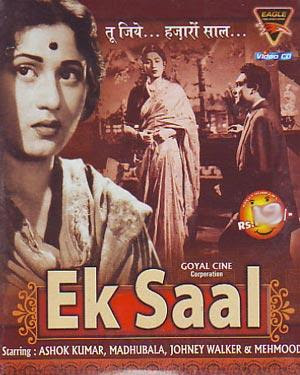 There is nothing more poignant then watching a movie about a girl who is slowly dying, knowing that the actress herself will not live long and is actually slowly dying. This depressing thought was the only thing I really took from „Ek Saal“, a drama with some romance and hurting thrown into it. I suspect that my copy of the film had some scenes cut out and I thus did not get to see the entire movie as it was released. There was nothing too obviously missing really, but at times I wondered. After all, it wouldn´t have been the first time something like this happened to me with an old movie.

Usha, a girl of a simple name and manner, as well as extraordinary face and gazillion of gorgeous expressions (yes, Madhubala), is celebrating her birthday and everyone wishes her „A thousand years to live“. Unknown to her though, Usha has a brain tumour, something her rich rich rich father just found out, and his heart is breaking. As it appears his daughter doesn´t have a thousand years to live – not even several more. Just one. And the devastated man decided that the whole year that remains should be filled with happiness and not a single worry for his laadli beti. And so when Usha falls in love with their new estate manager Suresh, who doesn´t return her gentle feelings, father bribes him: for every month he spends pretending to love his ill-fated daughter, he will give him a considerable amount of money. Suresh accepts with head lowered in shame – and joy in his heart! 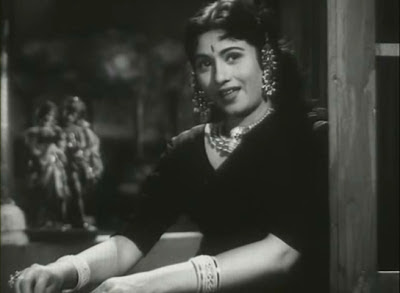 Because Suresh is in fact a conman, who is only trying to rob the rich family of as much as possible. And such an easy income as this he couldn´t have even imagined. And so he romances the girl and keeps counting his money, and planning a future of sorts with Rajni, his partner in crime. Since it is in his best financial interest to keep Usha alive as long as possible, Suresh searches for a doctor, who would be able to help her. But as the months are passing by, with unmerciful clocks tickling, he is becoming more and more aware that being greedy may not be exactly a virtue. And Usha´s innocence and love also start bringing their fruit. Suresh falls in love – for real. And unfortunately the possessive Rajni will have none of his lovey-dovey nonsense. 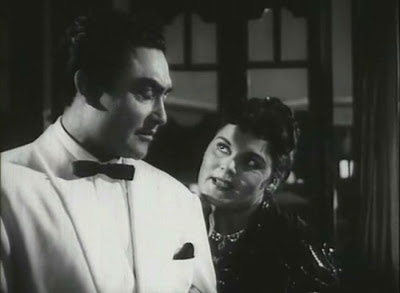 Why does Usha fall in love with Suresh? That was what I wondered in the first place. And I suspect that is where something was missing from my copy – because I don´t like an idea she simply falls for him just like that, in a matter of a few days, considering he didn´t show any interest in her whatsoever, plus was so bothersome to her at the beginning. Whatever the case, her love also chose to be quite blind. During the film there are several situations during which Suresh nearly shows his true face (like not believing in God and hiding suspicious letters before Usha), yet she never question him on anything, doens´t even stop to think about it. Then again perhaps Usha does have such a naive, almost childish mentality, considering her father decides she shouldn´t even know about her own state of health. Madhubala is as gorgeous as ever in the film, making Usha almost an ethereal creature, though not exactly someone you could relate to. She makes a nice couple with Ashok Kumar, who in his turn delivers a good performance too. Suresh and his change of mind (and heart) do not happen overnight and the inner struggle shown as a dialogue with his own mirror image/photo, who gain live for a few moments, is probably the most interesting aspect of the story. 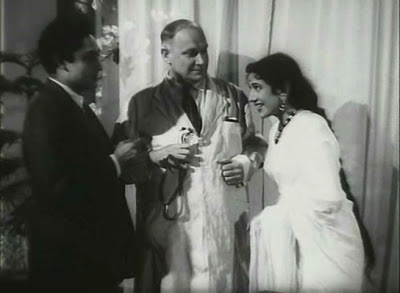 Kuldip Kaur as Rajni is one sassy character with an attitude. She is no walk over, and she doesn´t just sit about making empty threats. She goes out and actually does what she wants without any delays. She does make you hate her, at the same time I realised I admired her to an extent. Same cannot be said for Johnny Walker with his completely useless comedy track, that gets way too much space for my liking and I recommend to fast forward through it, because it really IS useless.

Ek Saal did not win me over. It failed to make me feel emotional. As I have already said at the beginning, only the knowledge that Madhubala, playing a girl dying of brain tumour, was slowly, slowly dying of her weak heart, stayed with me once the closing credits kept rolling. 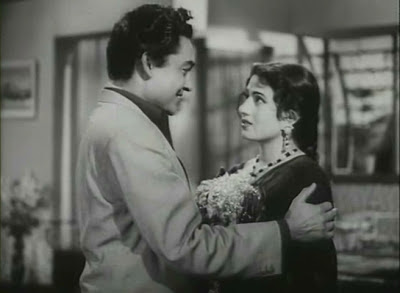