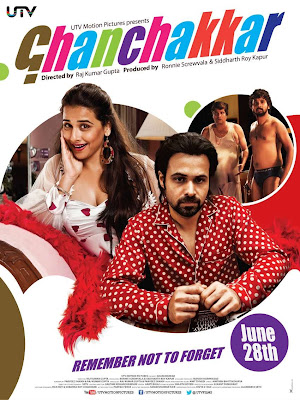 It all starts with two not well-introduced and badly drawn characters (even after the film you just wonder who, where, how and why?) of a married couple Sanju (Emraan) and Neetu (Vidya). I suppose he is some renowned criminal because first thing you know he is offered a job of looting a bank. He accepts and does the deed, aided by two goons, and he is given the stolen money for safe-keeping, until the time comes. However when the time comes he claims not to recall absolutely anything and the goons, angry that he is trying to trick them, move in with him and his wife to help him remember. To their despair Sanju has met with an accident after the robbery and suffers from partial amnesia, that one day may progress to the point of him not recognizing anyone and anything.

Somebody explain to me how sharing a flat with your possible victims helps to trigger a memory? How about taking him to the place where it all happened, trying to remind him of all the details? No. I think threatening his wife and masturbating over the phone will be enough. And Sanju, how about, when you think you have found the money, you open the suitcase to check BEFORE you deliver it to the goons? And director saab, how about some explanations before all that gore bloodshed that was definitely sickening but not even remotely funny, ten minutes before the end? Was there really a need for that happening anyway? Ghanchakkar progresses in the same line as starting your morning with Teletubbies and ending it with Dracula in Pakistan. Except there are no twists and turns. Yep, it is boring.

The film is centered around Emraan, with Vidya Balan playing the second fiddle. That itself, as unusual as it is, wouldn´t be of concern to me, if she actually had something to work with, but apart from screaming in frustration from time to time she is there only to model some atrocious clothes (was that pun at her off-screen persona intended I wonder?). Emraan.... what can I say? The dude is always the same, no matter what film he is at. He is not a „bad“ actor, but he seems unable to make his characters be different from each other and actually making an impact. The two actors playing the lame goons were better than the lead pair, but that does not really say too much.

I really expected more from this. Perhaps because of Vidya Balan. Perhaps because Rajkumar Gupta made rather good No One Killed Jessica. Perhaps because my standarts are set too high for any film really.... Ghanchakkar is nothing you could name. Except if you have your own „what the hell did I just watch“ movie label.
Posted by Gaja Gamini at 10:09