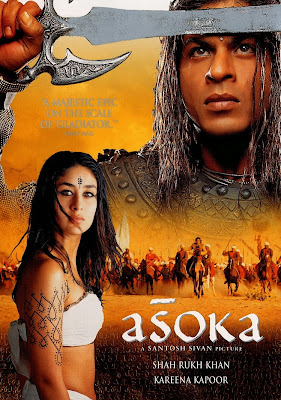 I love history which in many cases leads to my hatred for many a historic film. Because way too often it is taken more as an inspiration for a story, using names and background, but it ends up being so manipulated, so violated, that it is beyond my ability to forgive. Asoka, as I understand, is one such film. Yet it remained spared my hatred. Why? Because when I first watched it my knowledge of Indian history was equal to zero. All I saw was a touching story and well made film. It was only later, when my knowledge increased, that I realized how inaccurate from historical point of view it actually was. Because of this I understand why people have been let down by the film, and why they don´t like it. For me though it remains what it originally was – a good movie. In fact, better than (in my opinion) overrated Lagaan, which it released alongside with and was compared to in many aspects. And to give Asoka some credit, it stated at the very beginning it is not an attempt at recreation of history...

What it is a recreation of, though only partly and I don´t think they admitted it, is a Sunil Dutt/Vyjayanthimala film Amrapali. Asoka makers took the best elements of the story and added them to the historic background of Asoka and his character. And thus we meet Asoka, a prince in disguise, roaming in a foreign country, removed by the wish of his mother from the royal court, where his own brothers would like to get rid of him, since he is extremely capable, and they can only match him as far as ambitions go. Taking a common name Pawan, he encounters another exiled royalty – princess Kaurwaki and her little brother Arya, who are on the run from unknown murderers who took lives of their parents. Asoka and Kaurwaki fall in love, but fate is not kind to them. Bound by a promise Asoka cannot reveal his identity and just a few days of separation from the hunted royal siblings end up in disaster.....

The beginning of the film, especially the initial bits of Asoka/Pawan withdrawing into a self-imposed exile, is actually kind of sloppy. There is bit too much of dorkiness in the prince, in other words Shahrukh is that funny, adorable himself I love, but it somehow doesn´t fit the character. From the profession of love for Kaurwaki, however, the film becomes better and better, causing much of a heartbreak and reaching its bitter, but still satisfactory ending. During this time Shahrukh Khan truly ceases to be Shahrukh and bit by bit he is devoured by Asoka – the character, who comes alive through him. The helpless indifference, the pain that cries for revenge or little moments of gentleness, Mr. Khan gave it all his best.

I recall that Asoka was the very first film I have seen of Kareena Kapoor – and I cannot be grateful for it enough. Had my first film of hers been KKKG, I would probably hate her guts for quite some time. But instead she was introduced to me as Kaurwaki, daring, brave and yet not fearless, very feminine and very strong. I loved her. Sure, I had to tolerate her very much non-historic wardrobe and wondered how she managed to paint her eyes so elaborately even while on the run, but in the end Kaurwaki impresses. Strangely enough I rooted both for her AND Devi, a girl Asoka marries, to have a happy ending. I liked them both, as they were both so full of love and so deeply rooted in their principles. Danny Denzongpa completes the main cast, as reliable and admirable as ever.

Cinematography is – simply put – gorgeous. A times as if camera forgot about the characters and story, and lingered for a while on a minor detail, brought it up to its attention and admired its beauty. Musical score is beautiful – with an exception of the „evil theme“ stolen from the Lord of the Dance soundtrack – and Roshni Se has to be one of the most wonderfully picturized love songs ever.

As I have said before, the film lifts the most important moments from Amrapali. It doesn´t necessarily work as a period film, as mentioned before, but it works wonderfully as a love story with a historical background. And when you get used to Shahrukh´s long hair.... it´s even better :)