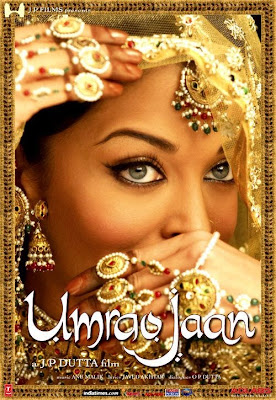 A story of life of a courtesan transformed from literature into a film that indeed feels like a lifetime. That long and that tiring. And so much concerned about the visual part, about how overwhelmingly pretty everything has to look, that it forgets to bring out emotions, fails to invest the viewer into the heroine´s plight. And since that is essential for quite a non-happening story as the one of Umrao Jaan, the movie stands only for tedious wanna-be try at epicness.

Not much is added to the famous story of a girl kidnapped from her family and sold into a brothel, where she grows up into a stunning and talented tawaif, capturing attention and affection of Nawab Sultan. Even this time the love story is doomed. Compared to the 1981 version with Rekha (the comparisms are simply bound to happen) the story is actually even simpler (not a good decision), leaving out the sub-plots involving a fellow tawaif Bismilah, as well as Umrao´s flight from the brothel to live by herself, and sadly also one of the most bitter twists of a similarly kidnapped girl becoming Sultan´s wife. All we are left with are 3 hours of pining after Nawab and crying without end. Indeed, this Umrao Jaan is not much of a company to anyone except one guy.

Truth is that the whole film is really just a passionate love-affair with Aishwarya Rai´s face. Wintin every five minutes there would be a lingering close-up, obsessing about her eyes opening slowly, closing slowly or staring without a blink, and 80% of the time tears would be flowing from them. Indeed she looks stunning throughout, no matter if she is wearing a bejewelled outfit or a simple one, and to be fair her beauty is definitely not the only contributing factor she provides. Aishwarya suits these roles. The Devdas and Jodhaa Akbra ones. She suited this one as well and her performance, even though unnecessary teary, is among her better ones. Her dialogue delivery in this is very good. But still, the seemingly endless dialogues that sometimes last for five or even more minutes, make the viewer impatient and bored. The script and the way story is crafted doesn´t help Aishwarya to connect and invite the audience into her heart and soul, where we could possibly feel with her – something Rekha did so effortlessly in 1981.

While Aishwarya is let down by the script, but otherwise fits, her beloved Nawab Abhishek looks like he found himself on the sets by mistake. There is nothing even remotely regal or dignified about him, and overal his besotted lover act feels thanda. He and Aish make the cutest off-screen couple, but camera is not really nice to them when it comes to chemistry. The relationship seems a bit forced really, with hardly any base. On what did the love grow one has to wonder.

Suniel Shetty as fierce and mysterious Faizal Ali fares better. The character of Gohar Mirza, played back in the day by one and only Naseeruddin Shah, remains unmatched. The young man in this version doesn´t really have the sneakiness or cunningness, and his feelings for Umrao are – as many other things in this – very much simplified and he thus becomes a lot less important. Shabana Azmi and Divya Dutta both give good performances, which is, after all, expected of both of the talented ladies. Also Ayesha Jhulka, an almost forgotten heroine of the 90s, makes a brief appearnce and is lovely.

A big part of Umrao Jaan are the songs, however the film does not deliver in this department either. Apart from „Salaam“, all other melodies and lyrics blend into one, none stands out and all are forgettable. Picturization leaves a lot to be desired as well, that in spite of Aishwarya being a superb dancer. Choreography concentrates way too much on the hands and neglects the rest of the body (I am no expert, and even I can tell the choreographer did not really have much of an idea what to do), relying, like much of the film, on Aishwarya´s beauty to distract the viewer and detract the attention from anything that may not be good enough. Does this strategy work? To an extent. Mrs. Bachchan is more than easy on the eyes. Unfortunately in the end not even that is sufficient to save the film from sinking into oblivion of your mind, where it by all mean belongs.