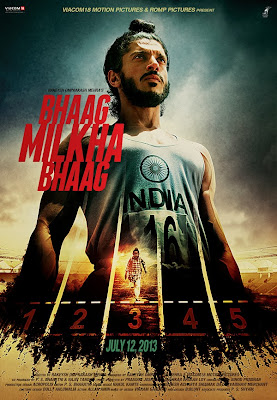 A biopic and a sportsfilm – two genres that do not count among my favourites. Yet Bhaag Milkha Bhaag crosses the borders of both and becomes, above all else, a complete emotional ride – without a trace of emotional blackmail that often plagues biopics (and Bollywood movies in general). Based on the life of famous Indian athlete Milkha Singh the movie tells a story of much more than just amazing achievements in sport. It is, in its heart, a story of a person, of a character development and growth, that is influenced by trying times, big challenges and inner conflicts.

Touching on India/Pakistna partition, an issue quite sensitive even today, even drawing from it as the foundation stone of the whole plot, Bhaag Milkha Bhaag manages not to feel political at all (not to me at least). The struggle and tragedy which we learn about as the film progresses, is of a very deep personal nature. There is no propaganda for either side, just an attempt to convey the harsh reality of the time and event, a reality that thousands and millions have not yet made peace with. Milkha in the film doesn´t hold a grudge. He holds a pain. Some may think I cannot have emotional connection (being neither Indian nor Pakistani) with the story, but frankly a family being drawn away from their homes and even murdered is a concept that, unfortunately, my own country and even relatives are familiar with. Horrors brought upon population because of big political decisions, no matter whose and for what, are a daily occurrence since the dawn of time. Bhaag Milkha Bhaag is not putting blame, is not pointing fingers. Tragedy simply happens because of circumstances of its time, and the film is not about taking a revenge, but about facing the past – and ultimately forgiving and moving on.

Farhan Akhtar was really good and he deserves all the praise for all the immensely HARD work he put into the role. It is definitely his best so far and may be also the one with which he will go down to history. There was not a single second in which he wouldn´t be thoroughly believable. He owns the movie. As a case of exception confirming the rule the child actor playing young Milkha was extremely good too, carrying some of the most important scenes on his shoulders and breaking your heart. Divya Dutta as his doting, devoted elder sister is also perfect. Their on-screen relationship is by far the most intense and moving one. Sonam Kapoor may be the most „starry“ name among the cast, her screentime is extremely limited though. Being associated with the film still helped her position in the industry, previously rather questionable. She is back on the map for now and hopefully will continue to do good work. As a simple village girl Biro she is really sweet and looks very pretty, She is so easy to look at one doesn´t want her to open her mouth and ruin the effect, but to be fair she did well overal in this. Her bits and the ending are the best parts of the movie in fact.

If there is a flaw, then it is only a teensee complaint that it is too damn long. If it was at least 30 minutes shorter it would be more gripping. Then again when I think about it, I cannot really think of any scene as useless, waste of time, and if I was handed the editorial scissors I would end up in a complete dilemma. Everything has its place in Bhaag Milkha Bhaag, everything seems essential to the story and character development. Perhaps the songs could have been done without, or be only incorporated into the background – the one in Australian bar was actually kinda awkward. So basically I was a bit bored during the first hour, but cannot think of much the film could have done without.

The story of „the Flying Sikh“ is inspiring both on professional and personal level. Sometimes facing ones pain is much harder then breaking records. But it should be done.  Because without forgiving there can be no healing.