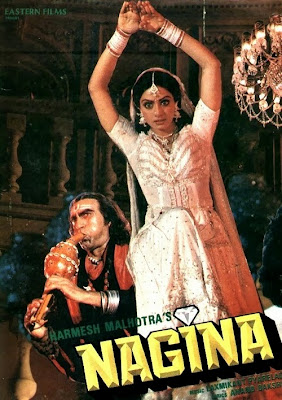 I HATE snakes. And this movie reminded me why. They are quick, noiseless and the way they move freaks me out. Usually I cannot even stand the sight of them. But I´m willing to watch this film again and again! Yes, it is good, one of the actual classics among the 80s pile of average crap. And let´s not play games: it is so because of Sridevi and Amrish Puri. While the movies would still be good with Jayapradha, the original choice for the film, Sridevi gave it something special and to be honest I think this is my favourite performance of hers. But more on that later.

Sweater-wala Rajeev (Rishi) returns home from abroad after 15 years, to his loving mother (who probably had him when she was 11) in India ready to take over family business, till now managed by an unusually friendly Prem Chopra, who is hoping that in return for a good service Rajeev would marry his beloved daughter. It may all have just gone according to plan, but „Raju“ falls in love with a mysterious young woman he encounters in the misty-veiled ruins of an ancient mahal. Rajni (Sridevi) introduces herself as a poor orphan, and Raju is happy enough to accept that and prance around the trees with her. But breaking manager daughter´s heart may just yet prove costly....

Nagina starts as a typical romance against all odds movie, but as it progresses it turns more to an action and family drama (with saas-bahu conflict) with distinct horror features. Those are rather subtle – for Bollywood at least - which makes them all the more effective. It is a great reminder that you don´t need super computer effects to create an illusion of supernatural and mysterious being real. From the haunting hide-and-seek song in the ruins of an old building to ever-present snakes following the protagonists everywhere, it gives hints but is never „in your face“. It is not predictable – another considerable plus.

Rishi Kapoor was already beginning to look very much out of shape at the time. There can be no questioning his acting abilities, but as a jawaan chokra for whom the girls are vying for after one glance he was not suitable anymore. Though yes, the charm he excludes makes his pairing with Sridevi quite nice (something which cannot be said for any actress younger than her, whom he romanced in the decade that followed). His character is not too endearing either. Raju comes off as somebody who cannot deal with anything himself and is constantly in need of help and guidance, be it from the manager, his mother of Rajni. He is actually just a pawn moving from one stronger persona to the next.

The film belongs to Sridevi, as I have already mentioned. Though dubbed by someone else in several scenes, she did just absolutely wonderful in the role. The highlight has to be her interaction with Amrish Puri. The fierceness she projects while threatening him can only be matched by his own thundering dialogues of the dark and the supernatural. Indeed, it is these two performers who steal the show and others just do not match. The legendary Main Teri Dushman dance number is a crowning jewel of Sridevi´s performance – and film. A song that actually sounds rather unpleasant was made into a fabulous spectacle by the dancer and choreographer (it is, to my knowledge, the song that put Saroj Khan on the map.)

One thing I could have done without was the (un)neccesary comic track. Apart from the usual loud people who talk but don´t think it was full of fat people and nasty wives jokes, that everyone in the film seemed to find hilarious, while I kept rolling my eyes and cringe. Ironically the funniest moment has to be the very end: „they lived happily ever after“ title plastered over an image of Raju sobbing over his mother´s corpse was just too unexpected and too much of a temptation for the cynic in me.
Posted by Gaja Gamini at 15:02