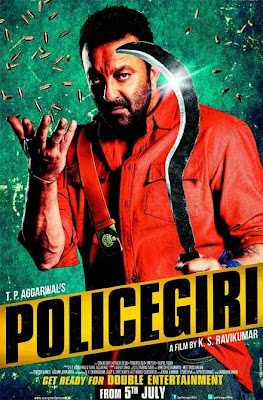 This film is just absurd.

I am not even going to try to describe the story, because Vigil Idiot has done that in his absolutely hilarious and painfully honest way HERE.

Yes, Sanjay Dutt is a kind of a man who looks convincing as a macho policeman with ability to beat the goondas on his own and not even break into a sweat while doing it. However I´ve had enough of films with Dabangg hang-over and the presentation of the main character in this is completely boring, in spite of unending explosions and dramatic shots to show us that SANJU IZ DA SUPAHMAAAAN. Like geez! Move on, we get it!!! Not only he is unstoppable and un-destroyable, but even his bloody CAR doesn´t get a scratch when it crashes down an iron gate.... Hell yeah! Watta ride!!!! Except The whole character of DCP Rudra made no sense. A policeman who lets the criminals do whatever they want "as long as they don´t harass or harm public"? WTF? Does not every crime harass or harm someone?

At the same time we are given a Sanjay Dutt breaking into a dream-sequence song while trying to pull off some Shahrukh-ness with some unconvincing CGI projection of mountains and waterfalls in the background and with voice that is painfully apparently not his. And lovely to watch, but annoying to listen to Prachi Desai (I would say "who deserves better", but every actress would deserve better than this) being head over heels with him. A word has not yet been invented to describe how incredibly they look together. At times it feels pedophilic. Either they should have abandoned the "romantic" part altogether and make Prachi his sister (if making her his daughter would make him look "old") or they should have searched for some actress closer to his age and desperate enough to be a part of this rubbish.

Prakash Raj has lost his touch it would seem. He has become a caricature of himself on the screen. That his villain is at the same time trying for some comic relief makes it all the more confusing and difficult to imagine he might actually be dangerous. The whole comic side-track thing (with Prachi´s potential beau) is really something that cinema has moved on from and while it belongs to the films of the past, it feels extremely regressive today. Not to mention - it is not funny.

All there is to dialogues are several un-endingly repeated punch lines that are not punchy, rest of the time the characters are threatening each other. Blah blah blah blah..... it´s like listening to a broken record. Villain to hero, hero to villain, they just repeat the same things to one another. I really hope that script writer asked for just half the cash, because he obviously did just half the work. And frankly for a pearl like „You have the voice like Osama, I have the power like Obama“ they didn´t deserve two rotis even..... The only good line from the whole film, one that actually had me laughing, was uttered at the beginning. "Beauty is in the eye of a beer holder!" Goes down to my book of favourite quotes. Question is: is it original?

I just hope that while in jail Sanjay Dutt will have enough time to think of his terrible film choices and when he comes out he will be back to making classics like Munnabhai or at least films that would be bearable.