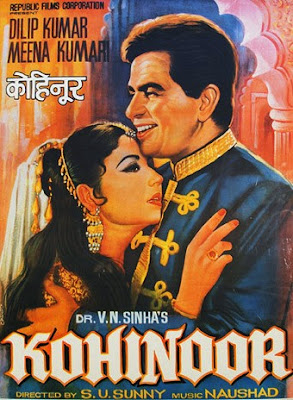 A delightful film sprinkled with comedy, romance and action, wrapped in pleasant visuals and stuffed with pretty songs. There is that certain naivity you have to accept, and when you do nothing can really prevent you from enjoying the movie. Kohinoor is unique because it showed the two people best known for their brilliant suffering on screen in a completely different light. Well, in Meena Kumari´s case the tragic part of it was not completely abandoned, but still. The film also proved to be exactly and literally what doctor prescribed to depressed Dilip Kumar, who had previously portrayed the eternal alcoholic looser in Devdas and found himself unable to just let go of him for some time. 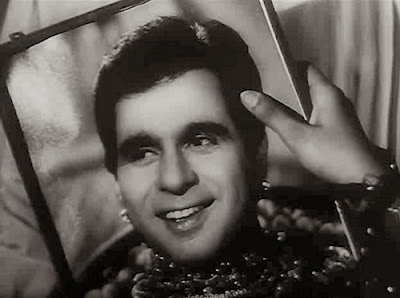 Dilip Kumar (as handsome as you can imagine!!!) is a Prince, who in spite of everything refuses to be over-dramatic. And that there would definitely be reasons for having a fit or at least a nervous breakdown! Attacks on his life are made – until even he gets suspicious and when he finds out that it is actually his seemingly faithful minister, who has been blinded by greed and sees himself on the throne already, the Prince is forced to leave his kingdom. But no worries, no time for moping – after all, he soon crosses the path of Princess Meena Kumari, with whom his marriage had been planned, and they promptly fall in love fall in love. Unfortunately there is someone else, malicious and sneaky, who is lusting after the beautiful Princess! 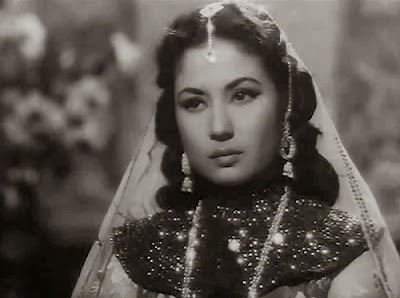 To see Dilip and Meena in such a film was sheer joy. Especially he gets an opportunity to tune into other than the mopy and depressing mood (which he previously crafted into perfection). And I really don´t think there has been an actor more handsome in Bollywood, ever, with possible exception of very young Sunil Dutt (I think by this point you get that Yusuf Khan is my Khan of all seasons). He handles comedy extremely well. I loved how chilled his character was! You just tried to kill me? Whatevs man, I have a girl to impress. You just shot me in the arm? Ain´t nobody got time for that, let´s sing a happy song. We are trapped in a building full of enemies? Here, darling, why don´t you handle them yourself, I´ll collect you later. 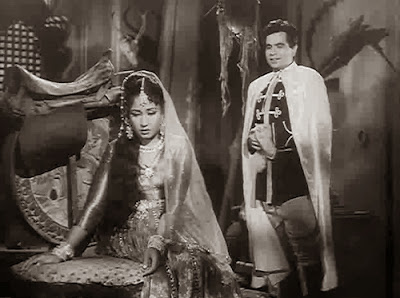 Meena Kumari too proved that she was capable of much more than just bringing tears into our eyes. She could make us laugh as well! Although I was bit irritated with the stereotypical character naive girl who doesn´t recognize her lover just because he put a fake beard on. There were moments in the second half where I was afraid the film has deserted the comic track and decided to go into full-blown drama, which at that point was the last thing I wanted. I had way too good a time being entertained! Fortunately our Princess soon realizes that fainting at every occasion gets her nowhere and starts throwing everything that she finds at everyone that she sees! 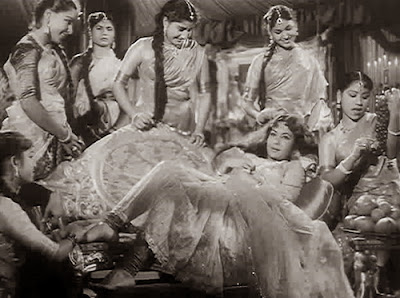 The villain turned out to be a very familiar face – Jeevan. He may not have the exaggerated English accent in this, but I just kept going back to „Raabert“ from Amar Akbar Anthony in my mind, every time he appeared on the screen. But he was good nontheless. And it was not his fault that he made such an impression on me in AAA, that I will forever see him in that role. After all, Kohinoor happened a long time before AAA. 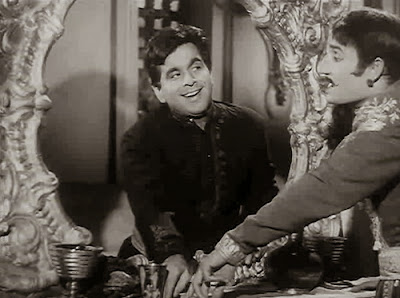 The film definitely won me over. Favourite moments? Many! For example a hysterical princess beating everyone over their heads with a stick, and the absolutely hilarious "missing mirror" scene between the hero and the intoxicated antagonist! Oh – did you know Dilip Kumar actually learned how to play a sitar just so he could do so in one of the songs?