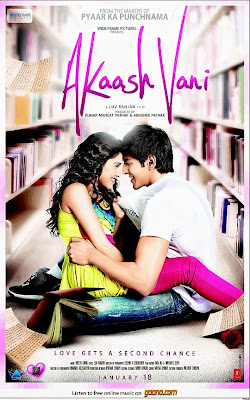 We may have seen students in love a countless times before, but very rarely does the relationship seem as effortless and genuine as the one between Akaash and Vani. There is no big I-Hate-You drama, neither does anyone stalk the other. Two people take liking to each other and that´s it. It just felt very natural, believable. Just as the rest of relationships we encounter throughout the movie. It is actually all more Vani than Akaash, as hers is the character growth and variety of situations compared to Akaash.

Going through a truly agonizing choice between duty to parents and promise to a boy she loves, Vani actually brings even more agonizing moments on herself. Some may argue that the guy she is promptly married off to is a caricature, an evil puppet of a man painted in the darkest colours for the sake of the film, but unfortunately such men do exist and they are actually not as scarce as we would like to think. Vani is less of a wife and more of a robot - and as crude as it sounds - a masturbation tool. She is being humiliated, looked down upon and raped. And yet when she tells her parents - they take her husband´s side. That too was just way too realistic not to strike a chord. Nushrat Bharucha does a great job as Vani. She is loveable and sweet at first, but bit by bit the fire is going out until she is pretty much a walking corpse.

Kartik Tiwari as Akaash is decent, but I did not think he was the best choice for the role. He looks too fragile and girly, which may be forgivable in first half, but once he reappears again one would expect him to be less of a child and more of a man. His dialogue delivery was bad. Also - even though I found the couple cute, Kartik and Nushrat do not really share a chemistry. Sunny Nijar as Vani´s husband is good and he makes it easy for you to hate him. His character is an insecure, sexist hypocrite treating his wife like shit and at the same time still feeling like the most gracious God she should worship with her every breath. This mentality is not reserved for Indians. I know such men and have seen such relationships where I live too. I was wondering if Vani was at least partly to be blamed for all the misery – after all she did not even try to love the guy, but all in all, after being raped for the first time, and then again and again, and never given a thought as a human being... no, I don´t think it was her fault at all.

Songs are good but some lyrics are awful (Baby I, your crazy, Lover, You smiling me climbing tower), and the greatest flaw is the uneven space given to different stages of the story. Vani´s marital life and her suffering are seemingly going on forever and after a certain moment it just becomes way too tiring to watch. It really balances on the point between gaining sympathy and feeling for Vani and melodramatic emotional blackmail. Similarly her "happy day" with Akaash after years was tad too long, not to mention the most "bollywood-ish" bit of the film - too good to be true.

The climax and ending, that should potentially be the most intense, is a letdown. It happens too quickly and doesn´t give any satisfaction to the viewer, who had been waiting for some serious confrontation with abusive husband and old-fashioned parents. But if the husband or the parents realize what really went wrong, we are never shown. Our Akaash Vani have their filmi ending without much fanfare.

Akaash Vani would have been better if it had some other hero and really sorted out its priorities. You can´t give me so much pain and have me shedding so many tears (I was positively bawling) only to solve it all with a slap. As if the filmmaker decided he had already shown what he wanted in the form of marital abuse, and the rest of the story was not really worth that much attention.