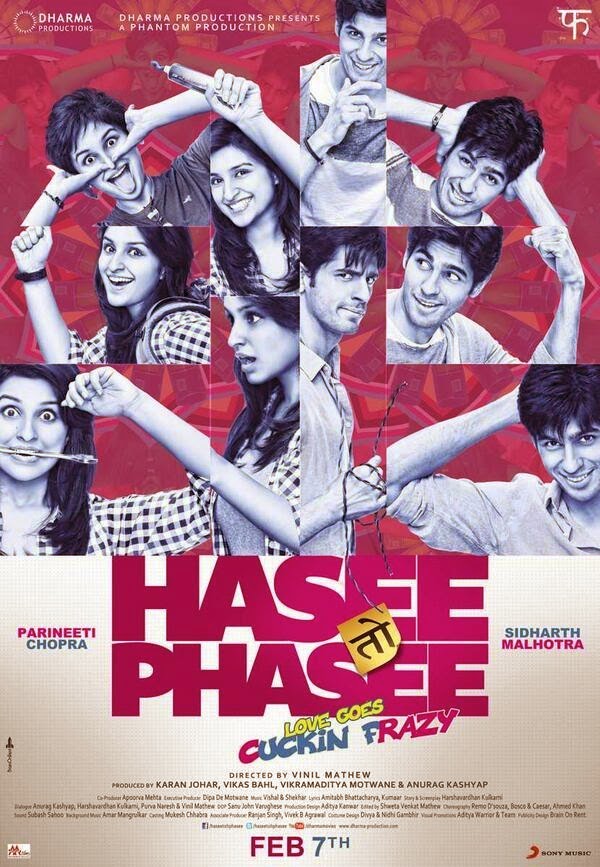 She is supposed to be a genius, so it is a pity we are only told that but never really shown. She is also supposed to have big trouble, but we are never shown the final solution. And him? He is marrying her sister. And just really wants everything to go smoothly. Which turns impossible with her around. That is Hasee Toh Phasee in a nutshell. Not free of the predictable factor, it still deserves some slack for trying to dress the romcom with some new and unusual ideas and twists. Most notably the girl is not „Bollywood beautiful“ and even though she dons a gorgeous saree or two at some point there is never a „make over“ needed for the guy to fall in love with her.

Parineeti doesn´t have a good start in the movie. And even when you realize she is on some strange mix of medications, and not in a regular human mode, it doesn´t really make the impression of her acting any better. She goes over the top a lot, but as the film and story progress, she slowly comes to her own and really becomes the character of Meeta. By the end of the movie she will have sold it to you completely. Her scene at the airport is brilliant. She is not crying. She is bawling, sobbing and all those emotions the pills would always put under control just overflow. (but WTF that lady in the bathroom did not see her her taking all those pills and throw up later? If this happened in front of my eyes I would at least ask if everything was OK).

Even though Meeta is a more complex character (she displays both determination and utter vulnerability all wonderfully blended in one) Siddhart Malhotra, who is either all drenched from the rain or his own sweat, yet not once does he take off his shirt (take notes Karan Johar!), is more than what he seemed in his debut film, I am pleased to say. He actually has potential and does very commendable job. He remains subdued, yet convincing. The performances by both Siddhart and Parineeti, as well as their interaction (which however isn´t full of crackling chemistry) are the highlight.

As are dangerously catchy songs. I still maintain that NOBODY can "shake it like Shammi" (and picturization of the song proves me only rights), but one is really tempted to try when the tune begins to play. Zehnaseeb is lovely and so is Ishq Bulaava. The Punjabi wedding song is no great shakes, but looks good on screen. The only song I could have done without was the Drama Queen, but since it plays during the closing titles, it doesn´t disrupt the flow of the film and can be skipped.

You may smile but it won´t really "catch" you in the end. Hasee Toh Phasee makes for a nice watch and has some strong points, overall it doesn´t emerge as a memorable film though. The entertainment is cleverly served to the audience throughout, so it never really feels boring, however the bits in between are hastily filled in with some really weird nonsense gravy. For example I did not understand the need for the whole tamasha with a stolen necklace. It did not show anything about any of the characters, neither it was funny – and in the end it remain unresolved, with the real thief never being discovered or punished. Also, the „peeing“ scene was awkward and random (if you need to go and are locked in a room, how about doing it in some corner instead of right under you and sitting in it?). It also feels weird to see someone exchange a girlfriend of seven years for a girl of seven days.

Hasee Toh Phasee is a film of a promise of future actor Siddhart and possibly also of more interesting romcoms to come.