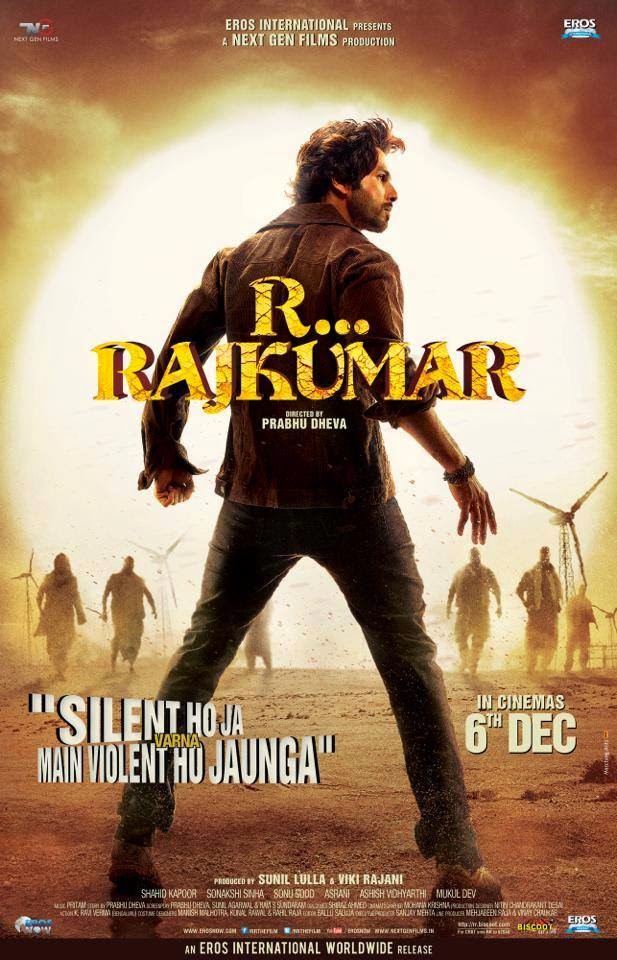 It goes without saying that Prabhudeva the director is stuck somewhere in the 90s and he seems to be immensely happy there. Which explains why, much like his previous movie Ramaiya Vastavaiya, R... Rajkumar doesn´t bring anything new or unexpected to the table. That in itself doesn´t mean that much, after all even movies that take a tried and tested formula can manage to be entertaining, and that, in the end, is really what counts. R... Rajkumar is good and enjoyable in bits, but overall I felt it was extremely random. In fact, it reminded one of those (in)famous Bollywood subplots that hop along the main story, just the main story here was completely edited out. You are left with comic sidekicks and romantic flavouring, but the great conflict that would be the driving machine of the film is omitted.

Stuff just happens in this story. Whatever little of actual motivation and reason is there gets introduced way too late for you not to question it. Who is this Rajkumar dude for the starters? He just randomly appears among two mortal enemies (one of whom is my favourite Sonu Sood) who try to dominate the trade of opium in some rural area, joins the gang of one and falls for the niece of the other (and since we are technically in the 90s this is the eternal and solid love at the first sight). Trouble only starts when the two gang leaders join hands and decide that the niece be shaadied to Sonu. After beating up all his goons our Rajkumar then declares he is "asli mard" who could take the gal away immediately but instead decides to marry her on the day decided for Sonu´s wedding. (aka he is a douche who doesn´t wanna pay for the wedding. So manly, yo.)

There is lots of beating goondas up and lots of threats that nobody cares for and the finale is over-dragged festival of (actually pretty gore) fighting between the hero and the villain while Sonakshi gets to stand aside and cry without a sound the whole time. The end is as random as the rest of the movie. What happened to Rajkumar and his lady love? From what I understand he is in drug business and just killed his boss. And she is a niece of a drug dealer too. Like... do they take over now, move to Kuala Lumpur, sell opium and drink champaigne with Russian mafia or what?

The stronger points of the movie are Shahid Kapoor and Sonu Sood, and - if you manage to surpress your frustration over such voluntarily waste of talent - Sonakshi Sinha. Soundtrack is good with already notorious Saree Ka Fall Sa being the best of the lot and mad fun to watch on screen. Shahid and Sonakshi are not at all a bad couple. While he seems quite natural throughout (and shows why he is the best male dancer in the industry), Sonakshi is slowly killing herself with her pathetic movie choices. Whatever she shows we have already seen, and not just once. The girl has it all and yet, she is now so incredibly boring to watch I could cry. I cannot even tell her characters apart (with the exception of Lootera) anymore. She is utterly gorgeous, but I wonder how long that will be saving her. Sonu Sood is a darling and proves yet again both his awesome physique as well as good comic timing. I would have married him.

R... Rajkumar is a timepass you cannot take seriously, and as such it can fulfill the ultimate goal of any movie: to entertain. If you love it, good for you, just don´t try to pass it onto others as great and quality cinema.
Posted by Gaja Gamini at 11:47