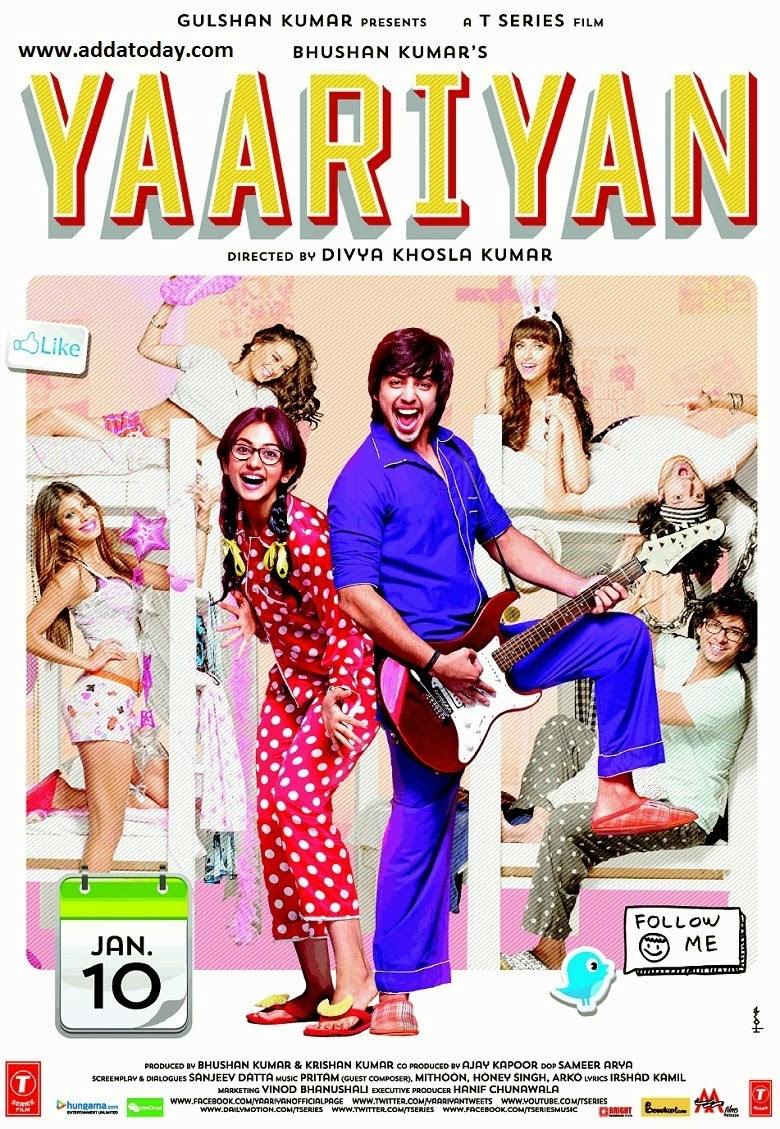 Mothers are saint. And girls exist to wear bikini and let random guys drool over them. Also, if you are a principal in need of saving your college, you should totally make a bet with nasty white man and send five most unlikable, lazy, undisciplined and just rubbish students you can find to fight a seriously stupid contest, because one of their fathers gave his life for Hindustan. Also, since the competition has some life threatening tasks, it´s fine not to have a single safety measure taken.

I expected this to be bad and stupid so you could say it exceeded my expectations. It was beyond dumb, dumbest film I have seen in a while. There is difference between taking some liberty as a filmmaker and making a film that is just RIDICULOUS STUPID and illogical.

Yaariyan stands for everything that is regressive, lazy filmmaking, and if indeed this is Divya Khosla´s first attempt at it - well, I hope she is not making another film ever again, not if she wants to exploit stereotypes, drive them to extremes and insult me as a woman, as a student and as an audience.

Cliché upon cliché, the whole plot is ridiculous and forced, and it would be a waste of time to try point out all the nonsense involved. Unlikeable lead actors (with one exception only) do not show any spark of talent or screen presence, none of them is a lead role material. Boys are sex driven machos and girls are annoying, affected and with no soul (and yeah, their dorm look like a barbie house.) It just felt all so terribly degrading it might be the most awful film to women since last year´s Shootout at Wadala. Just puke-worthy.

I thought Student of the Year was BAD, but Yaariyan is much, much worse. I still don´t understand how an adult woman could pen down a story in which every single woman except for the saintly Maa is nothing but a sexual object. And it ends with a close-up of a girl´s ass being – surprise surprise – stared at by a boy who is at the same time busy kissing a girl he supposedly loves. And bam. Closing title are showing Divya Khola´s baby boy and her boasting how awesome she is to be both director and a mother. W-T-F woman!

The only better point goes to catchy music, which at few points acts as a saving grace (I unashamedly loved Baarish). A flickering light of hope in all the darkness is Deepti Naval in a short, ungrateful and unimaginative role, in which she still manages to overshadow all the unworthy younglings. Hell, even Gulashan Grover annoyed me because his character of the school principal was so in need of a shrink and nobody in their right mind would ever appoint him to be responsible even for a cat.

And why the hell was it named "Yaariyan"? It has nothing to do with bonding or friendship! Those are just superficial terms never explored in this superficial movie. Don´t watch this film unless you are brave enough to discover some real lows of Indian cinema.

(I accidentally deleted the film before writing the review hence I did not have an oportunity to take screencaps to go along with the review. Here: have the only bearable bit of the film instead)