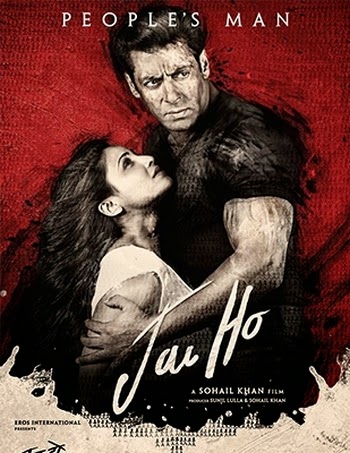 What is the point of films like this? That´s right. There is none. For whatever reason Indian masses cannot imagine anything more awesome than a middle-aged guy being himself on screen year after year after year. Jai Ho (which immediately makes the famous A.R.Rehman track go off in my mind) tries hard to convince you it has a plot and a message, but it is really just random scenes plastered together to fill in the time between overstretched and, by now, boring scenes of Salman Khan beating everybody around him senseless. Sohail Khan probably wanted to pay homage to brother who feeds the whole khandaan and the rest.... like script and story... are yet again viewed as inferior. That said Jai Ho is still somehow one of better attempts at Salman Khan-ish cinema, definitely more watchable than atrocious Ready and not as boring as Bodyguard.

The thought which is dragged through more than two hours is a genuinely nice one: if someone helps you, don´t say thank you, rather help another three people. I don´t know why you shouldn´t help AND thank, but OK. The flaw of this concept is naturally people are selfish bastards who rarely even say thanks, forget helping. But in Salman Khan´s bharat, where all social issues can be addressed in a single (awful) song, are people of pure hearts and indeed live by this rule. This „help other three“ stuff however soon gets on your nerves, because it is repeated about 50 times in the film, often within mere minutes from each other, and gets as annoying as the stop smoking ads in front of every film we all suffer through.

Other than that Jai Ho is a mix of bizarre and questionable, often brought to us by known and semi-known faces. I still cannot get my head around the character played by my lovely and cute Genelia D´Souza. She is obviously an extremely clever college student, unfortunately handicapped in a way, that prevents her from writing her tests herself. When her nikamma brother, who should be helping her, gets stuck in the traffic (and not for the first time), she fails the test and commits suicide. WTF. Are you seriously telling me such a bright, intelligent young woman would kill herself over ONE test? Are you telling me university will not give organize a retake for her, given her condition? Are you telling me in the whole building with thousands of students, teachers and staff they couldn´t find ONE person who would write for her instead of her brother? That is just an example of how idiotic situations make Jai Ho.

Between Salman Khan, Tabu, Mohnish Behl and Mahesh Thakur I has strange visions of Hum Saath Saath Hai going all wrong. They are all competent. Daisy Shah, a girl looking like a porcelain doll with baby face (bickering with a kid whom she calls with a nickname derived from his little „equipment“ while he know what colour her underwear is) , had a tiny role of no consequence and did Salman no favours by making everybody see he is another Khan too old for girls in their 20s. She dances beautiful, but I don´t see much of a future for her in Bollywood. A wild Suniel Shetty with a tank appears out of bloody nowhere too, just because. Danny Denzongpa is an iconic villain, and I don´t think Salman had such a strong opponent since the time of Sonu Sood.

In the end the movie can be really summed up as follows:

Note: I made the gifs from THIS amazing video :)
Posted by Gaja Gamini at 13:39