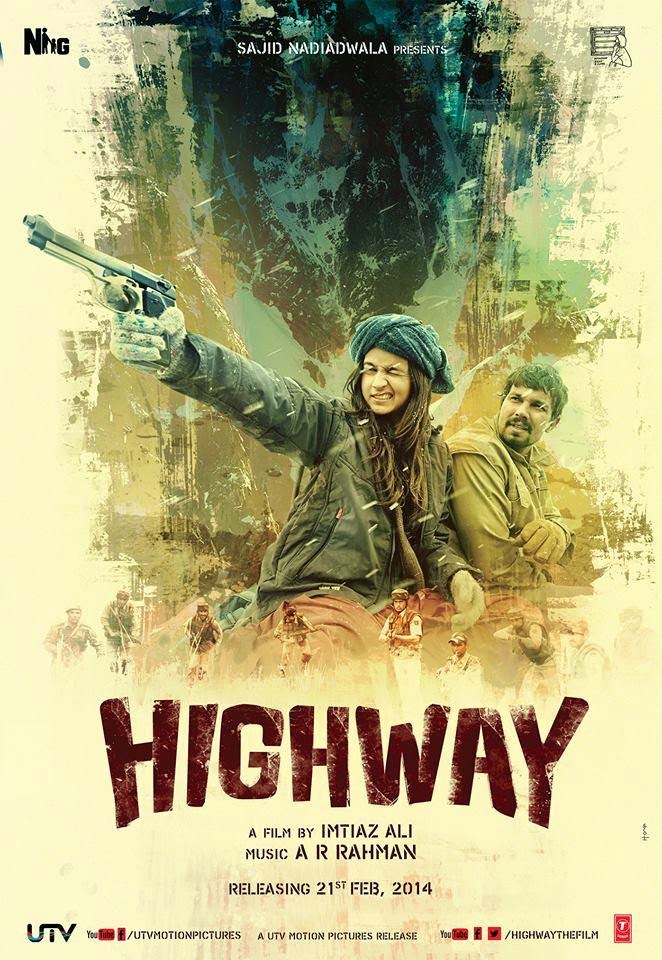 I genuinely loved Rockstar, but after Jab We Met, this one is Imtiaz Ali´s best film till date. He doesn´t work according to tried and tested formula. His movie lacks everything most of the mainstream filmmakers throw into the mix just to gain some more attention from the public. Imtiaz Ali is here to make films and that is it. And this one he made with much heart and much feeling, and I cannot stop thinking about it even though I have finished it several hours ago.

A daughter of a rich, prominent man gets kidnapped, by mistake and by chance, but kidnapped still. As the search for her starts, she is stuck with a group of mournful thieves, who are not entirely sure as of what to do with her. The group slowly goes their separate ways, until the girl, Veera, stays in the company of just two (and subsequently one, called Mahabhir) of her kidnappers. The longer she stays with them, the more she realizes how unhappy she was in her home. There is no bull-and-donkey sob story that would ensure her seeing „good hearts“ of her kidnappers – in fact she never learns the truth about them, and they do not need to save her from being raped just so she can promptly fall in love with one of them.

Highway is not a film about finding oneself. Veera is not in search of her identity, neither she is a shy girl who discovers confidence. And I do not even think the film is essentially about finding freedom – rather cleansing of the soul, in both Veera and Mahabhir´s cases. The movie has a distinct, interesting atmosphere and stirs emotions, some of the scenes are extremely powerful. At other times Highway becomes an enchanting composition of visuals and music, both as pure as one can imagine. Many a time I caught myself thinking Highway is, among other things, Imtiaz Ali´s ode to nature. Veera caresses grass and cries over beauty of swift river breaking against a rock, she is gulping the wind as if she could taste it, she stares into the heaven and feels completely content, happy to hear the whistles and songs of sheperds passing through the mountains. Highway is, for most part, a poem without words.

And yet, I did find a few flaws that took away a little bit from the overall experience. The movie has really two emotional peaks. Apart from the obvious Veera´s confrontation with her family at the end, the first one comes about an hour into the film, when she confides her story to Mahabir. An extremely powerful scene, but followed by suddenly very languid series of scenes that already disappeared from the mind. It takes a while before the build-up leading towards the climax again fully engages attention. Secondly, while Randeep Hooda gives a very good performance, there were several moments in which he did not resonate with my sentiments and one or two of his emotional outbursts felt somehow artificial. The character development may have been more elaborate, then again it may also have slowed down the already not action-packed narrative.

Highway marks the actual debut of Alia Bhatt the actress. After being an inconsequential showpiece in Karan Johar´s glossy awfulness of a movie, she can finally bring forth her talent. The girl is more than just Mahesh Bhatt´s daughter. Even if Veera was a character Alia could related to, it was still a challenging role, mostly unglamorous and one the whole film rested upon. She still feels like a diamond in a rough, in need of some polishing, and I have my reservations towards her baby-faced self taking on „sexy“ roles, which are inevitably coming her way (because EVERY girl HAS TO be sexy, otherwise she should not bother breathing), but hopefully there will be more „Highways“ in her filmography in upcoming years. Be it because of Imtiaz´s direction or her own intuition, Alia Bhatt impresses.

Highway leads you on a way that has no demands of anyone. It makes you remember the dark secrets you´d prefer to forget, but it also shows you there is always somewhere better to go. Start again. And feel pure again.
Posted by Gaja Gamini at 00:24