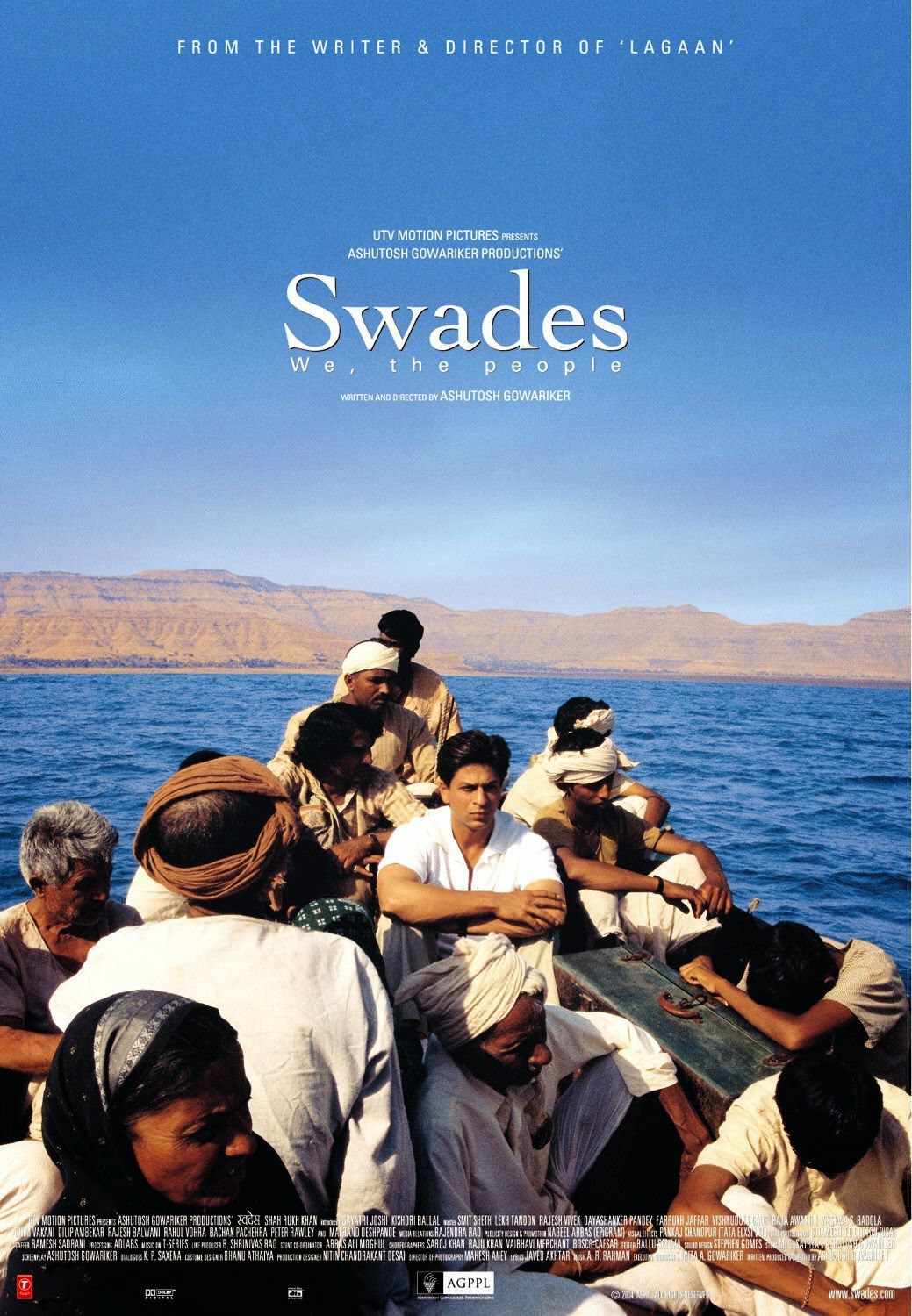 Ghar aaja pardesi! That is pretty much what every scene, every dialogue and every frame of Swades screams, pleads and sings. Ghar Aaja and bring your potential with you, stop wasting it on other countries. But to be fair, even though Swades is about India, the message it sends is for all foreigners living beyond their borders, and what could have easily become the stereotypical „bad West, holy India“ film remains a very honest effort to share an idea. If one relates to it or not is personal business. Mohan relates.

Played by Shahrukh Khan at his handsomest best, NASA engineer Mohan, settled comfortably in a luxurious flat in the US, can boast of illustrious career and success, and all he lacks is a bit of love. And for that special kind of love he needs to go back to India, where his old nanny lives in an idylic village of Charanpur. The plan is to relocate her loving arms and care to America, however the longer Mohan stays among villagers and is confronted with their everyday troubles, which previously he was aware of, but never truly gave a thought to, the more he feels a need to do something to bring on the change for the better.

What struck me about Swades the most was that, even though idealistic, it had a very human touch thanks to all the characters, among which we do find certain figures that often fall prey to stereotypes, yet even though they have their peculiarities, they are never turned into caricatures here. Mohan himself too has a very normal vibe, and his interaction with the villagers and their customs give one a good idea about his character. He obviously feels awkward at times, thinks certain issues ridiculous, but he also never shows slightest disdain or disrespect. Finally the villagers and Nasa engineer find a midle-ground comfortable for them all. Finally, while the film criticizes poor living conditions of certain classes of people, there is no sadistic poverty porn included. It is not needed for making a point. At least me and Mohan got it without it.

In many ways I felt Swades was Shahrukh Khan´s Lagaan, just without nasty Englishmen and criket. More realistic, but the problem is the same. It is too damn long. While Lagaan insisted on having a whole criket match (that really does very little or nothing to people like me, who are not familiar with the sport and do not care for it), Swades takes about hour and a half for things to actually také shape and start moving along a bit. On the first watch I found the film quite boring, it was only later, when I rewatched it, knowing I shouldn´t expect any great action, that I could appreciate it more and actually notice charming details and nuances that, ultimately, do somehow make up for the lack of happenings. The other minor crib would be that the lead pair doesn´t share any chemistry whatsoever.

All the actors do a very good job, the star of them all being of course the already mentioned SRK. Devoid of any mannerism he is known for, he delivers one of his finest performances ever. His Mohan is charming and adorable (watch out for his „bathing“ scene), and his depression in the serious parts of the film is as real as the laughs he eludes from the viewer in others. I truly wish this Shahrukh would return to us, and serve us another well-fleshed out character he could bring to life, rather than seeing him playing himself, which he had contentedly done so for several years now. Swades is, among other things, also a collection of seemingly ordinary, touching moments. Unlike other movies of the same kind it is not obsessed with parampara, but sees traditions as a fertile soil from which progress should sprout, if treated right. Oh and a special shoutout to Geeta for being a great feminist character!