Veergati is one of those film made by and for men who consider themselves awesomely macho. Or who think being awesomely macho is the coolest thing ever. The 90s have given us some real gems of Indian cinema, but there is also a dark side to them, and from its darkest depths of all stuff regressive comes this story of an orphan played by Salman Khan, weirdly dead-eyed and foreshadowing his non-acting today, even though back then, in other films, he has always beamed with energy.

It is all very bizarre and WTF from the very start. Upon bringing home a helpless baby he had found abandoned in the streets, a soft-hearted police officer needs to deal with a hysterical wife, who leaves him because one day the baby will surely make her yet unborn daugther a prostitute (if this sentence doesn´t make any sense to you, do not ever try watching the film). The policeman lets the pregnant wife leave him forever to raise up the baby. The kid grows up into a very disagreeable hero, who is supposed to be good in heart, but to be honest he acts like an idiot. To people he supposedly loves he is consistently hurtful, never failing to cry over the fact he has been thrown into the gutter as a baby, completely omitting how lucky he was to be found and brought up with much care and love. He also gets insulted because of his origin, and all in all the filmmaker expects you to embrace the character and pity him. Well, then maybe they should have tried a bit harder in actually making him less of an agressive maniac.

Also, for a person constantly cribbing about how he doesn´t believe in relationships and gambles away, he becomes hell of a preacher (and „slapper“ of young girls) on moral codes when other people are not respectable towards their elders. Nothing about Salman´s character makes sense. The acting is awful from his part, and while the rest of the cast do whatever they can (the extremely lovely Divya Dutta sucks in this though), nobody saves the day.

The awful moaning of women being raped creates an eternal soundtrack to the villain´s den or even his mere presence on screen, showing his power of the underworld in the only form Bollywood knows – by inflicting injustice to women. One even more fondly remembers Mogambo who had it all sorted and though he was a highly caricatur-esque character in a comedy film, he still commanded more respect and caused you worries than any filthy pimp whom just one cleanly shaved guy can destroy by shaking his muscles.

Perhaps you are confused why I have skipped describing the story, but there is not much to describe. Veergati is a diary of voes of a self-pitying agressor, who happens to be surrounded by people who never get angry with his annoying whining and abusive behaviour, and people who are just insane (yeah, still talking about the policeman´s wife). There is also a subplot revolving around the character of a friend, who is trying to raise money to get married to a wealthy girl he loves, but who cares really. In the end Ajay looses most of the people who are family to him (read: people who endless put up with his asshole ways), dresses into white sheets and goes on a vengeful killing spree mouthing some deep spiritual stuff in between increasing the death rate of the film. 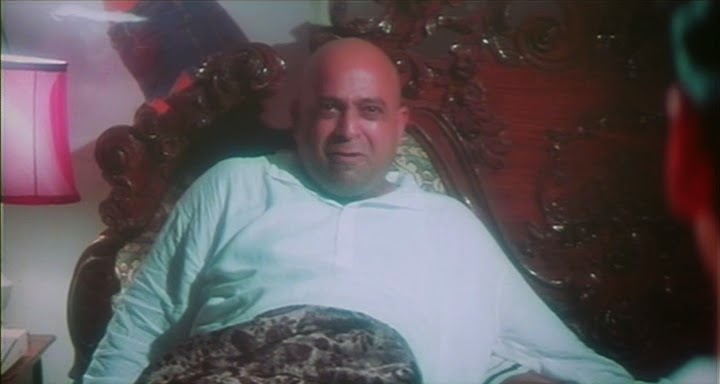 Neither well shot, scripted or acted, Veergati is more 80s than 90s, with all the darkness of bad cinema you can imagine under that tag, and a woman only having worth if she is a Maa.