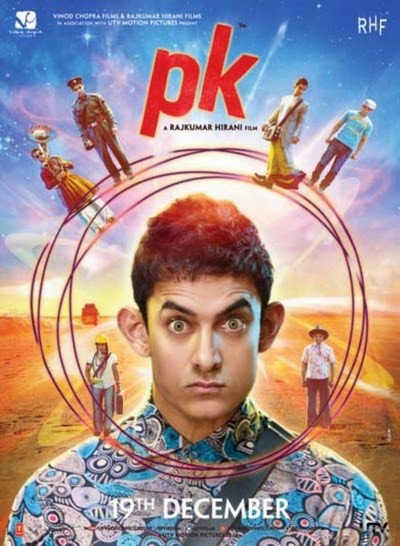 I love Raju Hirani and his films. They are cheeky, provokative, yet essentially „good at heart“, working with characters that go easily over the top, but still remain believable. Even if they are an alien, and even if the same faces have been used by the same director in his previous ventures, as figures very much unforgettable.

PK share much of its features with both E.T. and OMG Oh My God (starring Paresh Rawal and Akshay Kumar, and which I hear was also a take on some English film), so while this time it is not about being innovative and original, it is still about skillful filmmaking and cinema which can both entertain and educate. Certainly we should be grateful when a film like PK becomes a massive hit, instead of the mindless masala, at least once upon a time. Also thank God (the asli wala) that the film stayed away from much of romantic moping or emotional revelations, which would inevitably slowed the narrative down (It was not about romantic love anyway, so why dilute it.)

Aamir Khan gives a commendable performance, and while the biggest strength of PK is in the way his dialogues have been written more than anything, when his extravagant weirdness stops bothering you after a while, he slips into the role effortlessly. Anushka Sharma is a natural performer and one gets happy just seeing her twinkling eyes. Whatever she has been doing with the lower part of her face is completely her business and I do not judge her for it, but yes, I must admit in some scenes her mouth area was as distracting as Katrina´s lips in Jab Tak Hai Jaan. Saurabh Shukla appears and makes quite an impression as a mean religious leader, while the erst of the cast divide some special appearances. Boman Irani, I felt, got the mean deal. Given he has been such a power in Hirani´s previous movies, here he has nothing to work with at all. Sanjay Dutt is funny, and his shocking demise.... well.... shocking to say the least. The special appearance by Ranbir Kapoor at the end would have been an extremely pleasant surprise, had it not good friend tumblr ruined it for me just days after the film release.

PK, unfortunately, does not reach the higher than high standards set by Hirani himself with his previous films (namely 3 Idiots and above all Munnabhai MBBS). Half-an-hour-too-long, while it carries a fantastic message, it lacks any true drama to drive the plot. One feels for PK, but there is not a single moment when one would not expect him to return home eventually. Finally, the last twenty minutes seem sloppy. The whole explanation of „how maybe Sarfaraaz probably did not ditch you ever thought of that“ felt forced and over-constructed (does this word even exist?). Also, if you have a huge lasting fight over religion on national TV, there should be a grand conclusion, but the viewer is robbed of the experience, as the climax remains underplayed and underwhelming. Few times I also had to remind myself to be tolerant when it came to a fine line between humour and crude humour, without which Hirani seemingly cannot do (though I admit the dancing car was funny). The movie lacks memorable soundtrack.

When it comes of the specific theme of religion and how it became a big money spinning business, Rawal´s OMG remains superior. PK is more cute, with a hero and heroine more to the mainstream tastes, and on a grander scale. It carries the Raju Hirani signature: it is light-hearted, funny yet touching, all that just somehow little less than usual.