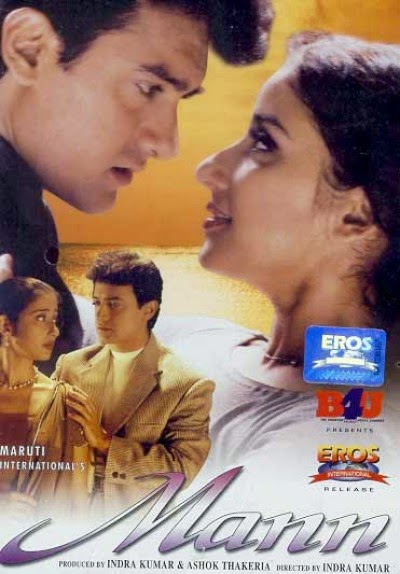 I sincerely, honestly believe that the ONLY thing that ever made indra Kumar´s films work was Madhuri Dixit. Apart from Dil, which I consider a good film, even if flawed, Beta and Raja were only bearable because of her awesomeness and talent, and everything after that I have seen of his work just plain sucks. Mann is no different.

There is so much wrong with the plot! A severely mopy Sati Savitri Manisha falls in love with a cheater and a liar because he loves his grandmom. Because him being able to appreciate the old lady equals, in Manisha´s eyes, to being a good person. In fact, the character played by Aamir Khan is repulsive, unlikeable asshole and womanizer, who enjoys being creepy. The lengths he goes to while „wooing“ women would get him a restraining order in real life. Yet she falls in love with him, is jealous of girls he pays attention to, even though she has rejected him before. By the time the movie reached the interval I was ripping my hair out of frustration and sheer disbelief. Then the asshole-ish hero turns good and full of izzat overnight. How am I supposed to buy that?

In the second half of the film we are served a completely different story. That of selfless love and that you should look around before crossing the road. Manisha´s face is all swollen throughout and her glycerin-tears-stained cheeks can only be equaled by Jaya Bachchan´s from Kabhi Khusi Kabhi Ghum. Because our heroine lost both her legs! From extreme „hilarity“ the movie sinks into extreme depression, and everything is so theatrical you just wonder what has the director do to make all these good actors act so terribly.

I was irked by so many things in the story, but the greatest outrage was perhaps when Manisha admits to the headmistress of the orphanage (where she had grown up) that she doesn´t want to marry the cheerful and genuinely nice Anil Kapoor (whom I did not expect in the least to show up), because she loves the womanizing stalker. She is then lectured on how she has no right whatsoever to follow her heart and be actually honest with her fiancé, because, you know, there is a chance he just might turn into a lunatic and go crazy because of that. And also: certainly, if she dares to refuse him, nobody will ever marry a girl from an orphanage again. Like WTF.

Aamir Khan is at his annoying worst (I think I read he regretted doing the film? It would definitely make sense.) Manisha looks disturbingly ill, I had to wonder whether she had some issues with her health off screen. Comedy has never been her forte, and her tragedy is too overdone in this. Anil Kapoor comes and goes, with the only sane character to play, but being himself more than anything. Sharmila Tagore cast as Aamir Khan´s grandmother felt so wrong! The fabulous actress, who was in her fifties at the time, is unrecognizable under a deck up of at least 80 year old woman, who appears very briefly only to pile on some more depression by dying in the second half.

Logic has never really had place in Indra Kumar´s universe, while annoying over the top comedy thrived. Mann, which also stole a song or two from vintage European hits (here is one and here is another) is a confused movie trying to go from comedy into a tragic romance, much like Dil, but comedy is lame and tragic romance frustrating. The first half, made up of every wrong cliché, made me uncomfortable, the second half with its mopier than mopy ridiculousness made me roll my eyes till they almost stuck on the other part of my head.

(note on captions: Sorry for lame jokes. I don´t  mind Anil´s stache. The Cinderella comment was indeed made in the film. Except the ending. Of course.)
Posted by Gaja Gamini at 21:06