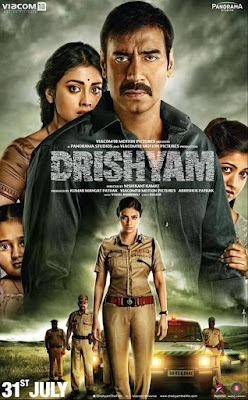 Watch more Bollywood films so you know how to get away with murder. That is the basic message of Drishyam. Also - teach your sons not to be slimy creeps. Otherwise they may not make it home one fine day. The film´s plot touches upon the topic of leaking of extremely private video footage, which leads to an accidental killing of the blackmailer by the victim. However the whole family becomes involved and Ajay Devgn (an uneducated TV-addict as we are constantly reminded) weaves a web of lies and half-truths that ultimately lead to a sort-of-happy ending.

The plot is definitely stretched in probability (there is NO bloody way the police inspector would have put it all together with so little information), but to be fair to much lesser degree than most movies Ajay Devgn has done in the past few years. Some explaining parts get tedious and you better not drop your attention any time during the film otherwise you may loose on some important points. The ending scene finishes everything brilliantly, bringing everything to a wrap, and leaving no questions unanswered. Except for one: Whom did the brother-in-law call? I am sure I must have missed something, and I have suspicions, but this piece of the puzzle is missing in my brain. However Drishyam definitely provides suspense and three-dimensional characters. Even the "good" and "righteous" have a dark side. The seemingly "evil" police officer has a motivation that has driven many a hero, over the years, to commit pretty awful stuff as well.

Furthermore the picture is very well acted. Ajay gives a very solid, balanced performance, without any ridiculous flying and smashing tricks that inevitably would transform the film into something else. His strength as an actor is that even when he keeps his voice and expressions down throughout the whole movie, he projects so much inner strength he never gets boring. Tabu is excellent, and to make a little confession, this was the absolutely very first time when I could see how good she is. Not even Haider and Chandni Bar had endeared her to me, but in Drishyam I could truly feel her emotions. The problem I´ve always had with her was how painfully boring she usually is to watch. Not here though. Shriya Saran (looking beautiful and more like one of Ajay´s daughters than his wife) gets lesser scale of emotions to project, in fact is destined, by her role of a mother (who apparently does not watch as much TV as her husband), to be scared and worried. Still, to be fair, she does very well. Both child actresses did a good job too, there was just no point in the teenage girl being adopted other than actually acknowledging how young Shriya is. But we need someone that young beside 50-years-old Devgn, amirite?

I was not sure whether to rate this film as good or great. It is something in between, so let´s just agree it is very good. And actually there is one more question that remains unanswered: Why does the "bad" police officer always needs to be the darkest one they have at the station? Where are the Aashiqui days when it was the white ginger psycho we had to worry about?