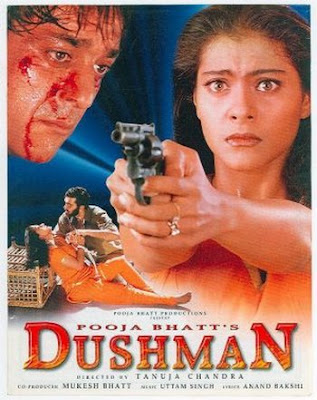 Few crimes are as awful as a rape. Not only it causes physical harm, it strips the victim of their dignity, violates their privacy, often it crushes their spirit. And when a rape ends with just as violent murder, hardly anything the darkest nightmare could conjure up even compares. And yet that is exactly how this film starts and what it deals with.

The lives of two twin sisters Naina and Sonia seem happy enough, with both going to the college and one of them accepting a marriage proposal from her boyfriend. In the good Bollywood tradition of twin behaviour, Naina (Kajol with long hair) is a calm, angelic and gentle being, whilst Sonia (Kajol in the most awful wig since the beginning of Bollywood until Anushka Sharma in P.K.) is loud, intimidating, roughened up kid. But then they capture attention of a rapist and Sonia pays the price. The angelic Naina sets on a quest of finding her sister´s killer, and hopes to prevent his perverted actions in the future. Her journey involves overcoming her own demons and fears, as well as some jogging and weight-lifting under the careful guidance of blind Sanjay Dutt.

Horrifying as it is, Dushman is a great film. I have not seen the Hollywood original, but I dare say Dushman definitely is a more than worthy remake. Perhaps the best scene are the moments before Sonia´s death, as Naina helplessly, verging on hysteria, runs among the cars in traffic jam, all the time listening to Sonia´s screams over the cell-phone. The portrayal of the rapist and murdered is excellent, showing him not only as a disgusting deviant, but also a cunning liar and sly operator, who manipulates the only woman who (for whatever reason) actually cares for him.

The star of the whole thing is of course Kajol, who is only challenged in her performance by truly terrifying Ashutosh Rana. It is by far the best work I´ve seen Kajol doing and I would be much happier if people would talk about her talent with references to films like this rather than to mediocre stuff like Kuch Kuch Hota Hai or even worse to K3G. Dushman gives her a great scope and great material to work with and she seizes the opportunity. However I would have been much happier had there be no love subplot, which I found completely unnecessary, not to mention Sanjay and Kajol do not work as a jodi to me, not at all. Sanjay overal did well, but his character, just as the whole subplot, was given more importance than I would like, as I was hyped about all the thrilling stuff and confrontations between Kajol and Ashutosh, and Sanjay bits were only slowing everything down and distracted one´s interest. For the sake of everything it would have been better if we saw more of the training than romance.

The climax was way too violent, way too long and the music behind it way too awful. And the very ending took away from the feeling of satisfaction brought in by the climax. The romance nobody cared about should not have diluted the sense of relief and justice previously brought on by the bloody death of the rapist at the hands of his upcoming victim.


Excellent thriller I cannot recommend to ladies as a late night movie unless you have a box of chocolate, strong boyfriend and fully loaded Beretta by your side.