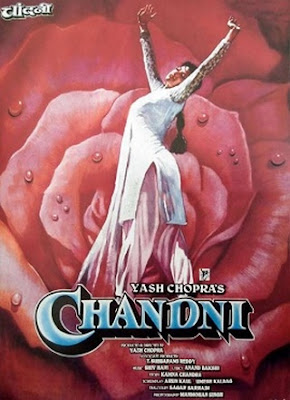 Chandni is iconic. No doubt about that. Even if only for introducing the myth of Yash Chopra´s „eternal woman in white“. Myth, because after Chandni, she hardly appears in any other of his films. Yet so deep is the image of Sridevi dancing an enticing tandav engrained in all our minds, that we accept her as something definite. Yash Chopra´s „woman in white“ has always been adn always will be Sridevi in Chandni, and no one else. However much like another film that set certain standards - Dilwale Dulhania Le Jayenge - Chandni too is a movie that has its own problems, and though iconic, it ain´t untouchable. So let´s touch it today, with some delicacy and some less delicacy as well. 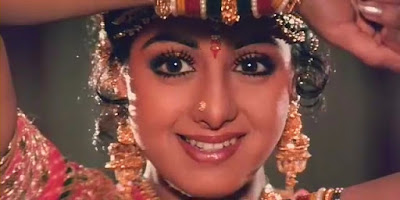 Rishi Kapoor plays an obnoxious rich dude who employs all the annoying, forceful ways of getting closer to a girl he likes, and pretty much gives her no choice in matter of loving him back. When life turns tables on him and does not go the way he planned it to, he falls into depression, gives up completely, and slips into a hardcore self-pity mode. In short he is a douche. Sridevi plays beautiful, annoying in her childish mode, touching in her serious mode, Chandni, who likes to dance in the rain and is... well... beautiful. That truly seems the most prominent feature that Yash Chopra chose to endorse in his heroine that time. Sridevi with her thick mane of hair, long limbs, shy smiles and of course those huge eyes looked like a fairy-tale come true. The first half is cruel to her character though, as she is merely dragged along by Rishi and his family. But Chandni also manages to pick up the pieces of her shattered heart and make a new life for herself, complete with a successful career job and a new man who falls in love with her. 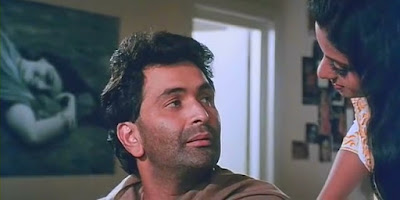 Enter grief-stricken Vinod Khanna, whose mother Waheeda Rehman is probably closer to him in age than his first pyaar Juhi Chawla, who appears in a small but sweet cameo. He is all that Rishi Kapoor (in this film) is not. Thorough gentleman, principled, going after his desires but not forcing himself where he is not wanted. So naturally he does not get the girl in the end, because Rishi suddenly decides he wants Chandni back – and much like in the beginning he blackmails her into a renewed relationship. Sigh. I was ready for Hum Dil De Chuke Sanam after this, to heal my aching soul. The score of the film did its share of healing too, for if there is something worth going back to, it´s the music – yes, including the out-of-tune Sridevi parts of „Oh meri Chandni“. The already mentioned wild tandav in nature is stunning and „Tere Mere Hoton Pe“ remains possibly my favourite track ever picturized on Sridevi. Chandni is also, quite possibly, the last film in which I was ready to accept Rishi Kapoor as a romantic hero. No matter what problems the characters displayed, all the actors did a good job with their roles, even if Anupam Kher going around and mouthing tutotial on life and love was boring. Again, I much prefered his meddling in Lamhe than here.

Chandni is one of the best known Yash Chopra films, and was one of his most successful ventures, however compared to let´s say Lamhe it lags behind, as a nice, but all in all average film. It is a notch better than Kabhi Kabhie though, being more tight in screenplay and not bothering about too many characters. Furthermore in spite of the obnoxious boyfriend (hell he even tricks the girl into getting drunk in pursuit of bodily pleasures), Chandni must have been a revelation at the time when action masalla had its boom. It aimed for simplicity and lots, lots of romance, on which it delivered (though there is still the question of the douche who initiates it all. And the whole Switzerland bit was unneccessary.). I have given up on Yash Chopra films being great in terms of script, rather it is best to simply let go and try and enjoy the atmosphere he managed to create. With this film he succeeded in conjuring up a charming little thing, even if only with help of Sridevi´s beauty and lovely music. 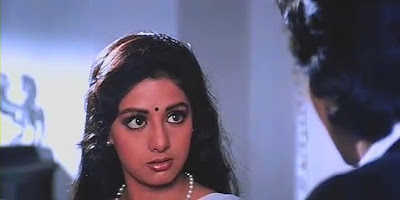