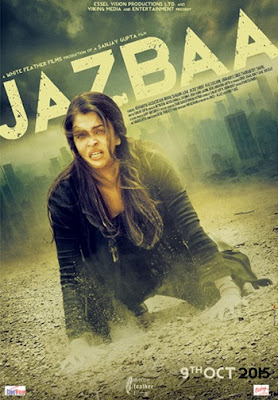 This is another film which I don´t really have a proper rating tag for. Jazbaa is hardly “enjoyable”, but it falls somewhere in between whatever and good. I suppose “reasonably fine” might be the best description. I have little admiration for previous work of Sanjay Gupta (though I admit I have seen just a few of his films), especially after the incredibly awful and over-flowingly sexist Shootout at Wadala. Jazbaa, a remake of a South Korean film, is marginally better than that. As a comeback film it does Aishwarya Rai more favour than for example Ishkq in Paris did to Preity or Dangerous Ishq did to Karishma. Coming on the heels of movies like NH10 or Mardaani, though, it looses some punch. And no ammount of weird green undertones that drown the Jazbaa world can change that.

She may not be kicking anyone´s ass in the physical way, but Anuradha Verma (Aishwarya) kicks ass as a top lawyer. She does not shy away from dirty tricks, from hypnotizing the judge to even tampering with evidence, just to win her case, even if she knows her client is a criminal. No matter of “this is how lawyers are” makes this right. But then her little daughter is kidnapped and Anuradha´s eyes turn almost permanently bloodshot from all the tears she sheds. Soon enough she is informed that the kidnapper wants her to release yet another criminal, a violent rapist and a drug dealer this time, if she wants her daughter back. With the help of her best friend (Irrfan) Johan, a corrupt and suspended police officer, Anuradha starts investigating. Interestingly enough, as you can see, the two main characters are actually far from honest innocents. Their absolution in the end is quite subtle, I didn´t even think about it at first.

Irrfan, usually so good in everything, manages to be a let down. He may be shouting and kicking into trash cans, yet his eyes and face show too clearly he doesn´t give a shit. Shabana Azmi has too little footage to really review anything. She appears in very few scenes, does what she must with clean conscience, and leaves without making much impact. Considering she is eventually revealed as the kidnapper, as well as the mother of the raped and murdered girl, she certainly deserved more space. There is Jackie Shroff in this, for a few moments, and for very ineffective villain shading.

The only noteworthy actor thus remains Aishwarya Rai. There is absolutely no reason for her stretching into all angles possible in tights scene in the opening sequence of the film, other than to show everyone she is indeed back in shape (we all remember how she committed the crime of being pregnant and not loosing weight within a week after the baby came into the world). But stay calm, the director wisely decided we needed to see her all bendy and trim before the film even starts. Not that I mind seeing that, but I am not fond of random shit that doesn´t really tell you anything about the film, the plot or the character. That said, the actress holds her ground and her glamorous image is not exploited after that opening sequence. Some of the scenes showing her anxiety and pain are very over the top, however let´s imagine any loving parents in a similar situation. Sometimes it looks awkward and not pretty to break down. Aishwarya ain´t Meryl Streep and her dialogue delivery will never be perfect, still she gives a solid performance, one that many of the more current Bollywood ladies can so far only dream of.

The biggest problem with Jazbaa, I feel, was the lack of “gripping” factor from the start, and some of the actions seemed so illogical they raised to many questions of why. The things finally got more interesting in the second half, fortunately, still there is little mystery or thrill to rave about. Watch for Aishwarya if you missed her. I did.
Posted by Gaja Gamini at 10:24