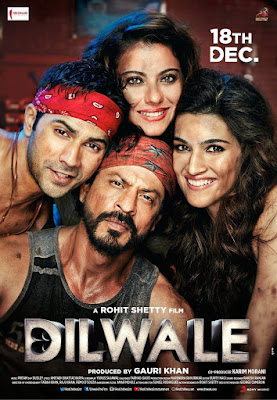 Bade Bade Deshon Mein Aise Bure Bure Filme Kyun Hote Rehte Hai? So very high on style and so so so so poor on everything else, including the most important bit: the entertainment. Dilwale is really no worse than many 90s films that I actually enjoyed. In fact most of it seems like written right on the sets without preparation or thinking about posterity – a common practice back in the day. The problem is that both cinema and me have moved forward since then and making a movie like this simply doesn´t seem like a good idea anymore. I have been patiently waiting for a great Shahrukh Khan film since 2007. His latest collaboration with the cars fetishizing Rohit Shetty prolongs this wait yet again. I liked Singham and enjoyed Chennai Express, however the more success Shetty gets the lazier he becomes when putting everything together.

The story stretches your brain into the dimension of complete confusion, the level of suspension of disbelief raises too damn high. Let´s just say I absolutely don´t buy that when two mafia gangs loose their bosses they simply disintegrate and move into the same town where they live for fifteen years without ever running into each other, especially since they maintain quite public profile as enterpreneurs.

Rarely do I find the whole cast of individuals, that I actually like in other things, so annoying at once. From Hyperun Dhawan with some pee and shadily lewd jokes he spurs in first ten minutes, to Boman Irani who is presented as a complete idiot without being funny at all (what propelled Shetty´s Singham forward was a sense of threat, there is nothing of it here), and of course Kajol being cute and bubbly at first, everyone grated on my nerves with their „acting“. Furthermore random comedy scenes with Johnny Lever used to be a filler, while in Dilwale it takes at least 70% of the whole length of the film. As for Shahrukh Khan, once upon a time my favourite Bollywood actor (he had vacated the number one spot to Dilip Kumar by now), he looks sexy as hell with the beard, but damn all those filters erasing every single line away from his face deserve a vanity van of their own. I liked Shah in this better than in Happy New Year, in which he was just awful, still a very lazy performance that challenged him in absolutely no way.

Kajol has probably never looked more beautiful, never has been so well styled before. But that is as much as Dilwale offers to her and her fans, for the role has no meat and her character is same old same old. No matter that she wields a gun (and when she is in BIG trouble she goes: „Kaaaaaaaliiiiiiiii!“) and is not 20. Her role is of that kind of spoilt college queens who learn their lesson when the guy they had previously treated badly doesn´t repay them with evil, and so they fall in loooove with him. Then there is a misunderstanding. That gets cleared up later by someone completely unrelated. And all is theek again. If you like the SRK/Kajol pairing, you can enjoy some of the scenes probably better than me. But you have to admit the whole romantic angle sucked, consisting of long stares that got awkward sooner or later only.

In the end Dilwale just seems like the team got together to have a good time and to excuse this big party they improvised some scenes without thinking, then sloppily pasted those together. Not even action scenes look good, though usually are Shetty´s strong suit, because of over-editing and annoying flashes and sound effects. Shahrukh Khan let me down. Varun Dhawan cooled my enthusiasm for himself. Kriti Sanon had better role in Heropanti. Kajol proves yet again she doesn´t really care for the quality of the script as long as big name is attached to a project. Rohit Shetty aspires to be the next Prabhudeva of the film direction. And he stole a scene from Love Actually that is so iconic even I know it though I´ve never seen that film.


So very average it deserves the bad rating, because films with so much money in them, starring such big names, and earning that much paise, should simply be better.