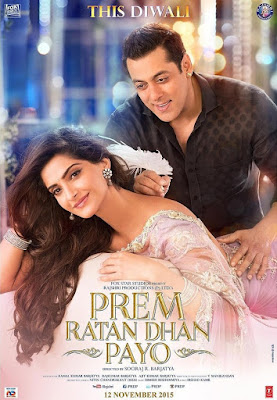 I like certain level of predictable in life and Rajshri films, especially those directed by Sooraj Barjatya, have quite lots of it. You can always count on a film about a big family which upholds traditions, bursts into a song every five minutes and there is no shortage of earnestness so melodramatic it is hardly seen in normal life. The plot is paper thin, but who watches this director´s movie for plot and conflict? We watch for the unearthly sweetness, for parampara, for colourful songs and attractive people in them. Does Prem Ratan Dhan Payo live up to the standards set up (and never scaled) by Hum Aapke Hain Koun? Not quite, though it does try its best and even contains several things I never would have expected.

The unexpected thing no. 1: The raja who could not keep it in his pants. The family this time has fewer members than we are used to (only 4!) and they are not in loving unison at all. The reason? They are all children of a certain raja, but they do not have the same mother. They don´t even have two same mothers. They have three, one of whom was not even a legally wedded wife. When she is driven out of the palace with her two daughters, those daughters logically carry a strong grudge. Then there is Neil Nitin Mukesh in the most pathetic and ridiculous mode I´ve ever seen him in (and he is rarely great to begin with) as a younger brother, who hates his older brother because evil secretary has sabotaged everything he had ever asked for while posing as a faithful servant. Considering every request could be granted by simply asking personally, this seems like a very flimsy excuse for a raging hate, that leads to repeated attempts at murder. Then again I suppose a guy who thought that building a shiny mirror palace for his children will solve every problem was probably destined to fail at raising his kids from the start.

The unexpected thing no. 2: Actual murder! Not accidental death or passing because of old age. We get a murder and even a shot of a hanging body. Graphic? No, not by any filmi means. Unexpected in a movie like this? Hell yeah. Other than this, however, the evil plotline is completely ridiculous, simply because Sooraj Barjatya is great at presenting samdhis humming to a joyful melody, but sucks at creating tension and a more complex conflict. All the bad guys are also responsible for 90% of bad acting in the movie.

The unexpected thing no. 3: Sonam Kapoor. As Princess Maithili she is among the lot of more or less demure, obedient Barjatya heroines, fortunately the curse of “cabbage personality” has missed her. In fact she may be my favourite female Barjatya character after Nisha-ji from HAHK. From capably running a charity organization to openly longing some gentle physical love, she is a person with life clearly reaching beyond the palace walls and making rotis. Thus it seems even more unfair that the ultimate decision to follow her heart is snatched away from her, no matter how happy the ending. Sonam manages to be delightfully demure and without trying to be spunky and bubbly (death for a young actress). Her somehow theatrical acting has a grateful background in the all but realistic universe of Prem Ratan Dhan Payo. She is good.

The unexpected thing no. 4: Sonam and Salman are not an awful jodi. Be it because of filters on Salman´s face or whatever, the twenty years between them are still awkward, but on the screen they looked good. Salman himself, so bulky and muscly his neck looks just weird and you can´t dispute that, carries the movie forward, mostly devoid of stupid one liners and threatening poses, that had made him a caricature more than an actor in the past few years. His performance doesn´t shake the ground (except that one time in the mirror palace, literally), but counts among his better ones in this millenium.

The unexpected thing no. 5: I enjoyed it. More than I had thought I would, and in spite of everything cheezy and silly that occasionally made me face-palm. Even in spite of Anupam Kher, repetitive in his 1885th role of paternal figure, that cannot be distinguished from others. Even despite the fact that we spent ten minutes on a really weird football song while more interesting things were apparently happening elsewhere. Prem Ratan Dhan Payo is an easy watch, and a pleasant one too if you are in the right state of mind. Most of the songs merely pass you by, but the title track is catchy enough to get stuck in your head. I know what I´m talking about. I´ve been singing and humming it since Friday....