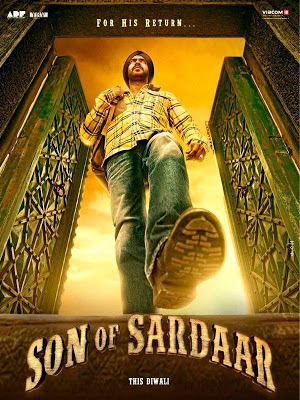 Son of Sardaar is fun. Light-hearted, uncomplicated, straight-forward and most importantly family friendly. It is possibly the only big masala film of 2012 that has no sexual innuendos, no double meaning hints, no gay jokes or raunchy dance numbers. It is silly, oh yes, the amount of silly is quite considerable, and it definitely makes clear yet again that Bollywood action is more and more going South (where gravity means nothing and physics wanders around unemployed) and hence not believable in any way – which in this case ads to the „family friendly“ I have already mentioned, because the „violence“ shown is so over the top you just cannot take it seriously. The major weakness is the very beginning, that may turn many people off, as it is rather cringe worthy. Taking a jump of Big Ben and dancing among a horde of white women in desi clothing (my ears would hurt at how much voices would raise on social websites against such cultural appropriation – and they would be right) and fighting off white goons a minute later made even me considering if I should even bother. But once Salman Khan´s useless cameo is over, things do get better. A lot.

The story has roots in an age old enmity between two rich Punjabi families, who for generations have been slaughtering one another and taking revenges and so started an unending cycle of bloodshed. Until a wife of a recently murdered one decided she has had enough, took her children and fled from India. She saved herself and children, but complicated lives of the other family, of which various members took various oaths: to never eat ice-cream, to never have a cold drink, and to never marry – until the last offspring of the hated family was not killed by their hands. But how to fulfill such promises if the person in question is nowhere to be found? And so there are is no ice-cream or cold drinks for some, and no shaadi for others. For over twenty years.

Then one day out hero Jassi is distracted from his pathetic dancing with white girls in London by a letter summoning him to Punjab because of some inherited land, and Jassi flies down to India with an intention to sell it and then peacefully return. While on his way he meets feisty no-nonsense girl Sukhmit and falls for her immediately. What luck she travels to the same place as he does. And even greater luck awaits it seems: after he looses her on the train station, he runs into Billu, who invites him home, and it turns out Sukhmit is his cousin. But don´t be fooled. The luck is not about finding Sukhmit. It lies in Jassi being within the walls of Billu´s house. For he is the one they want to kill, and they soon find that out. But to harm a guest in any way is just not done. They have to wait for him to step out. And Jassi, completely shocked upon learning the truth by chance, does everything that might delay his leaving.

What surprised me was a simplicity of the plot and settings. Apart from the train traveling at the beginning and some wild chasing near the end everything happens in one place. The plot is also very straightforward, and the filmmakers managed to keep it interesting for most of the film. True enough, some of the scenes could have been shorter, because you do get the idea of what is going on, and after some point you grow a bit impatient and want things to move forward – had film lasted 2 hours only, it would have helped. The songs are put into the film well, but sadly none really captured my interest – and the Po Po song is definitely a product of some really ill mind.

All the involved actors prove they have a great comic timing and talent. Ajay pleasantly surprised me, because I expected him to be an unbeatable machine without a trace of fear, and while he definitely shows that when necessary he will give everyone a lesson, his Jassi was more of an average guy wanting nothing but everyone to get along. Sanjay Dutt too is very good, my only complaint is: why did he have to look so bad? The styling was just horrible – and made me question who would wait for over 20 years to marry him? Especially if the bride herself is the beauteous Juhi Chawla?

Now, Juhi in this film you either like or hate. And it is really up to how you decide. Indeed, I felt like I was put before a choice. Because I could say she was a delight to watch, a sweetheart and a cutie, who deserved more screenspace and I would mean it. And at the same time I could say she was over the top and took it to the annoying level, and it would still be kinda true. But I was happy to see her in a mainstream film after so long, so I largely go with the first. Sonakshi is the weakest of the four leads, which is no insult to her, since all are seasoned actors who have proved themselves numerous times in the past, at the same time Sonakshi definitely sells you Sukhmit as a real character, and that goes to her credit. Although yeah, she looks like Ajay´s daughter throughout.

And so I ended up nearly loving Son of Sardaar and cannot understand all the hate it got.