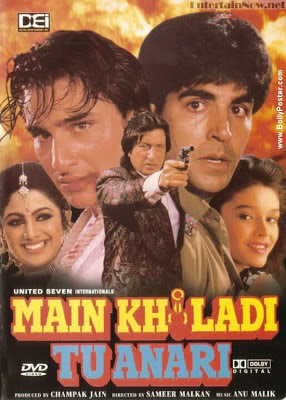 So I finally ventured into the Khiladi franchise with Main Khiladi To Anari (because in spite of its title Khilad 786 cannot be counted as a part of it as far as I know). As someone who is not impressed with Bollywood action scenes, I was a bit apprehensive, because it is action scenes Akshay Kumar is mostly (and unfairly cause he has a lot more to offer) known and applauded for. Also, while Saif Ali Khan today is among the best actors and my favourites, young puppy-like Saifu in those films of the 90s I´ve seen seemed rather awkward. And that Shilpa Shetty cannot act became clear within first ten minutes.

When an honest and uncorrupted police officer is murdered by a drug dealer Goli (Shakti Kapoor), his lover Mona (Shilpa) spills the beans to a handsome police inspector Karan (Akshay), only to have her long skirt torn (cause showing her long legs is essential for the film) and to be killed. As it happens the murdered inspector was Karan´s older brother, and so the chhota bhai sets out to avenge his sibling. But what to do? He has nothing against Goli now that Mona and her sexy legs are gone.

Meanwhile, in some other part of the city, a popular actor, an ultimate romantic hero Deepak Kumar, is having an existential crisis. Not that his films wouldn´t be doing well, but he hates them and himself in them. Sick from the image he has he is longing to kick ass at least once in some „asli mard“ movie. While unsuccessfully explaining this to a producer (who is also a mafia boss), he encounters the ultimate kick-ass machine inspector Karan fighting for justice, and immediately decides this is the exact image he needs to create for himself. To be able to study Karan´s mannerism and behaviour he manages to pull some strings and soon tough and rather anti-social inspector (still trying to get his revenge) is officially stuck with a naive, flamboyant and oh so filmy superstar. At the same time Karan finds Basanti, a girl who acts exactly like the annoying Basanti from Sholay and looks exactly like the deceased Mona, and after one night lasting English course she transforms from an illiterate thief into a high profile bar dancer, planted into Goli´s closeness under a pretext of being a Mona, who survived, but is not dangerous for him because she lost her memory...

The film has its share of loopholes and flaws. I wasn´t comfortable with the „love“ twist that brought Basanti and Karan together. I don´t care he didn´t really rape her, and it was actually set up by her so he would think that. The idea behind it – that a raped girl should marry the one who raped her – is just repulsive. If in the middle of Bollywood a writer cannot come up with a better idea of how to push two characters together, let them rather stay single. It was better to watch Deepak romancing Karan´s sister, although here too one wondered how much there is to actual love, considering she was a nutcase of a fangirl. But both love stories and even the plot involving Goli and all the avenging are really just a background – for some seriously awesome Akshay/Saif bonding.

It´s between the two of them that the actual relationship happens, a relationship that truly deserves a label of „bromance“. They have wonderful chemistry and even in acting they were complimenting each other. Their comic timing is wonderful, especially Saif got me in splits with his almost childish stubborness and yet being clueless about what to do most of the time. The purpose of his character is not lost in the progress, he doesn´t loose the bohemian spirit and never abandons his aim to build his new image.

Main Khiladi Tu Anari is nothing but an unapologetic fun. To analyze it and nit pick on the story is almost irrelevant, because the fun is what matters, not any moral values. Extremely enjoyable with the (today) unintentionally (?) hilarious songs and dancing, as well as Kader Khan being a movie star fangirl, the movie also has a great repeat value and doesn´t get old.