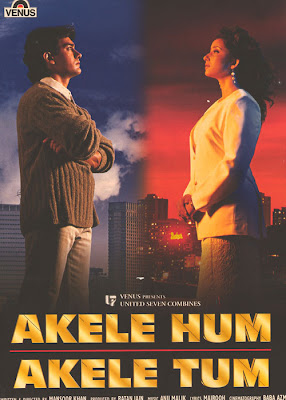 On some levels Akele Hum Akele Tum made me extremely happy. A sensitive, and not being all black and white in its views, story about one marriage´s failure and consequences, is not a common Bollywood (or Indian) concept for a movie. The film caught my fancy because of this venture into an unsure and unknown waters, as well as because it actually does try to show some new dimension and perspective to our heroes and heroines. At the same time the film failed me in some aspects, that are „small“, but seemed quite important to me nontheless. As usual I have not seen Kramer vs. Kramer, and American film this was based on, so there is no question of comparism from my side. 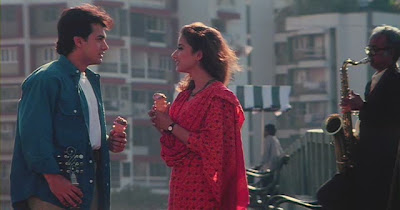 Rohit (Aamir) and Kiran (Manisha) are two beautiful young people. Bonding over their love for music, they start a relationship. And sharing the same dream – to make it big in the music industry – promises to bind them even more closely. In spite of her parents´ wishes Kiran accepts Rohit´s proposal for marriage, full of optimism and happy to have a husband, who, as she believes, will support her in her efforts. However reality hits hard. It is not easy to pursue ones dream when she has to tend her busy husband. And all dreams are all but left when she gives birth to their son. While Rohit is toiling, trying to fulfill his musical dreams, Kiran is home bound, being everything a proper wife is supposed to be: a cook, a maid, a nurse..... but unlike many a heroine, she is not happy.

Kiran is one of those rare speciments among Bollywood female characters who actually nurtures ambitions of her own and her idea of happiness does not fully equate tending family. After a while she cannot take it anymore and on verge of nervous breakdown she decides to leave her husband – and also their six years old son, and starts building a career for herself, starting in a chorus in advert jingles and ending up a top film heroine. Meanwhile her husband is all bewildered upon realizing how difficult it is to take care of household and son, and his own promising job turns sour at first, and pretty much dies a slow death.... 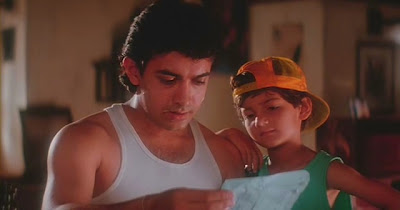 The story is largely focused on Rohit´s part of the story and his bonding with son whom he neglected till then, while a story of one woman´s emancipation is pretty much just a background. Pity, because both the journeys in the reverse role universe would be worth exploring in detail. We don´t really see as much of Kiran as we should. We do not really feel what she feels and we don´t really know what her expectations or doubts are, apart from the beginning of the movie, when she indeed resembles just a wild animal trapped in a cage. On the other hand we do get a wonderful portrait of a father, who only without wife manages to grow up into a caring and thoughtful man. In the end it is bit of a disappointment for the viewer (or rather for me) that Kiran is indeed painted in the negative colours more than necessary. Her motives and reasons for abandoning her family are left without an attempt to make the audience understand. And while she regrets and asks for forgiveness, Rohit never even apologizes. I would rather believe „we failed each other“ statement Kiran gives rather than „I failed“ admission that is pretty violently drawn out of her a bit later. 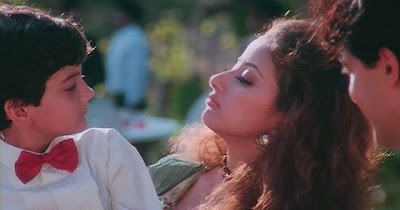 The film ultimately belongs to Aamir Khan, who gives a stellar performance full of feeling. From frustration and anger to loving and protective as well as insecure, he gets is right, and his equation with his on screen son is wonderful. Manisha as Kiran is very good, but with less scope that I expected. Akele Hum Akele Tum thus remains a sensitive venture into human (and parental as well as child) psychology, that left me with moist eyes, but it is not exactly feminist friendly.
Posted by Gaja Gamini at 11:27