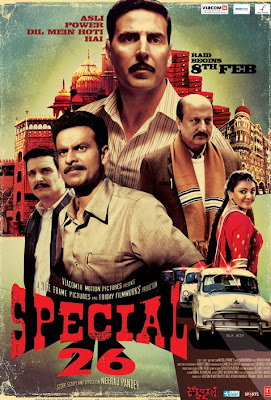 It is interesting to see how over the years we have abandoned the once so admired honest heroes armed with the flaming sword of justice and spotless shield of patriotism (as well as an A-Z dictionary of morals) for witty Robin Hoods, aka crooks and thieves taking from the rich (and not giving it to others). Stealing from greedy people is "right", but being greedy is not. It is acceptable that you are a thief if you only steal from nasty people. Be it Don, Chulbul Pandey or the gang of this film, we have learned to root for the bad guys. Who are not all that bad. Just outlaws. But still not bad. So steal away, kid, just make sure you steal from the right people. Or something like that I think. Makes my head spinning a bit.

Back in the old 80s (ironically enough the time of the spotless on-screen heroes in white shoes), a gang of several men make their living of crime – which is always the same. Posing as CBI or other government organization, they raid houses of rich people, whom we can suspect are most probably corrupted, and under a pretext of taking all the money and riches found to the authorities, they simply pack their own bags. And live happily until the need for more money and adrenaline lures them out of their homes to try again, some place else. However it seems their wit finally found a match on the opposite side of the law. An actual CBI officer Khan, with a help of a policeman, previously deceived by the gang, manages to locate one of them and through him also finds out details about their next target, which is to be non other than a huge jewelery shop in Mumbai. Will he manage to stop them? Will they outsmart him? Will the law win or will our crooked heroes will? My unfortunate ability to predict twists and turns proved functional yet again, though I dare say not everybody figured the missing piece of information out before it was actually revealed.

The film takes quite some time before actually taking off, and the plot perhaps could have been more elaborate, and one or two more twists would only ad some thrill and mystery (though after the twistingly twisty Race 2 even a dozen twists might seem too little). Maybe it would have been good to actually give more depth to the characters, who apparently all come from different backgrounds and have families and other bonds, but the sane viewer in me knows this would only slow down the story, that needed to be quick – in fact a lost quicker than it ultimately was.

The love track is one of the most useless ones ever, doesn´t even make anything for the ending. Kajal Agarwal hardly speaks in those four scenes she has, which is actually a plus because I can barely stand her. In any case seeing her with Akshay gave even Mr. Kumar away - he too is, much like his Khan and Devgn collegues, officially looking too old to romance anyone under 30 and pass off as younger than 40. On the bright side his performance was on the subtle side and very good. Hopefully we can see him in films like this and last years OMG more often. The acting stars of the film though are Anupam Kher and Manoj Bajpayee, both dominating the screen whenever they appear. Other supporting actors like Jimmy Shergil (sporting an unflattering moustache) and Divya Dutta (who is repeating one line throughout the film), are alright.

The settings of the 80s India are excellent, at times one truly wonders how in the world did they manage to recreate the Mumbai of that time so flawlessly and on such big scale. The camera work is good, and overall there is nothing to complain about when it comes to technical aspects. Special 26 is a good film, well told, well presented, well acted, well put together. Not brilliant, but good.
Posted by Gaja Gamini at 20:40