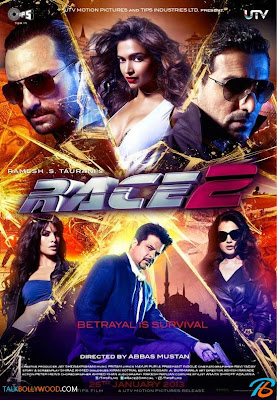 It´s all bigger than the last time. Our „players“ are unimaginably more rich. Our babes are even more sexy. Our cars are even faster. And our plotholes even dumber. First Race was a decent flick, but definitely not in a need of a sequel. I must sheepishly admit I ended up far from hating this one, in spite of all its shortcomings. I blame it on the fact I was busy with a family celebration for a few days and then just collapsed in front of my laptop, wearied by loud uncles and criticizing aunties, and was just happy I could switch my brain off and watch some moneywalas pretend to be serious about something that kinda resembled a story. While the first Race was ultimately a story of two brothers and their endless rivalry, Race 2, though not short of numerous twists and turns, doesn´t really care about creating an interesting plot, that would back up what was happening.

Last time we saw the hero Ranveer Singh he was speeding away into the sunset with his lover Sonia, but now, as we are told, „they are no longer together“. Instead Ranveer cleverly cons a (seemingly) random casino owner, leaving him penniless, and gaining (seemingly) trust of Armaan Malik, a guy who has so much money he can buy a small island every week and has a palace with so many room he wouldn´t be able to even see them with his own eyes in more than ten years and probably has a unicorn pooping a rainbow on his backyard as well. As you could have guessed he did not earn this quite legally (but how is never answered, because obviously even hinting how a common street fighter managed to earn as much money is a waste of precious time, that can be spent on capturing somebody´s butt, that is to be blurred from the screen anyway), and he runs his Empire with help of stunning step-sister Alina and girlfriend Omisha.

But why does Ranveer bother befriending him? Oh yes, Armaan is the one who ordered that Sonia would be killed (remember that not at all subtle hint on „they are no longer together“?). That´s right, Ranveer Singh, this time, play for revenge!

Twists and turns, though plentiful, are not nearly as shocking as in the first film. Mainly because that´s what you expect – that nobody is actually honest. You also simply know Saif is going to win the „game“, so you don´t feel worried when he drinks „poison“ 30 minutes before the film´s end. Loopholes are for everyone to see, from a professional killer who instead of simply shooting Saif decides to abandon his weapon and experience ten paagal minutes of an insane chase only to be killed himself to completely dumb nuns and guards of the Shroud of Turin (hopefully the real guards are not as stupid).

As many have said already, Race 2 is all style and no substance. Computer effects look like something made 20 years ago and most of the action in the finale will give you a good laugh instead of „wowing“ you (yep, I´m talking about the flying wonder car).

All the actors are actually also all style and no substance in this. Saif churns out a decent performance, but his Ranveer has no real competitor that would elevate him among a truly interesting characters. Akshaye Khanna is badly missed, because John Abraham does not have it in him to convince you he is menacing, scary or witty. He pretty much sucks in this, the highlight worth mention is his really brutal fight in the ring. At first it seemed Jacqueline Fernandez would steal the show, but as the film progressed she kinda vanished. Meh. Deepika Padukone has next to no role. Those 15 minutes she gets show how she improved her dialogue delivery in the past year and also that she is damn stunning, but this is not a film anyone will remember for her or rememeber her for.
Person who doesn´t have much to do is also Aditya Pancholi, then again his was only a cameo, and unlike Johnny boy his mere presence can make you shiver as if you indeed foudn yourself in presence of a dangerous mafia boss.

The greatest mistake of the film, loopholes and shallow characters notwithstanding, was including Anil Kapoor´s character from the first film in this. Even in the first movie Anil was just horrible and needless, and it is even more so now. Super annoying Sameera Reddy disappeared, but just as annoying Ameesha Patel steps in – and Anil and her reprise the EXACT same thing we have seen, with NO difference whatsoever. Just the jokes are more crude and disgusting.

Race 2 is a film you don´t need to see, even if you are a fan of any of the actors involved. It is not a downright „bad“ movie, since it definitely has a potential to entertain (I am a proof of this). It has a rather good pace, great cinematography and even unintentionally hilarious stuff can actually be counted as a plus point. One of those flicks for the undemanding.
Posted by Gaja Gamini at 14:16