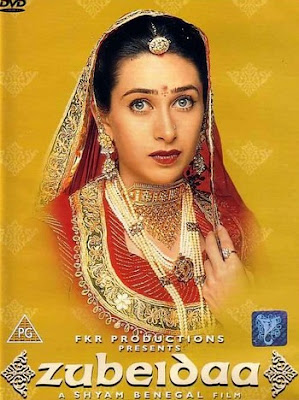 Everything that is great and wonderful about Karishma Kapoor is in this film. She´s been a very inconsistent performer and her filmography overflows with horrendous movies with some really bad performances, but then there is also Zubeidaa, which in itself is a reason enough for me to have a soft spot for this Kapoor girl. True enough, she also had Fiza, but there she was equaled by both Hrithik Roshan and Jaya Bachchan, and the film had its weak points. Zubeidaa on the other hand is one of those movies that are, according to me, near perfection.

As Wikipedia informs us “The film is based on the life of the ill-fated actress Zubeidaa Begum and the writer of this film Khalid Mohammed is her own son.” That in itself gives the movie a unique feel, and indeed the pattern of the movie captures this. The story of mother is step by step rediscovered by her son, whom she supposedly left for her lover, only to die in a plane crash few years later. However Rizwan (her filmy son), believes there is much more to the tale and tirelessly keeps looking for clues and information that would tell him the truth nobody wants to talk about.

Zubeidaa, a daughter of a wealthy and well-thought-of Muslim family, was a lively and strong-willed girl with a mind of her own, and very much modern in her desires. To act in films, to dance, to study abroad.... all this she sets her mind to, but one by one her hopes are shattered by authoritative father, who may be doting, but at the same time is extremely dismissive to female independence (as is clearly seen in the way his wife treats him – like a God, and thinking of herself as worthless dust). Zubeidaa feels more and more depressed as her father manipulates her and controls her life. Forcing her to marry, forcing her to be divorced, he never asks what she wants. And Zubeidaa bears it, though unhappily, until she actually falls in love – with a Hindu raja.

Zubeidaa is really a story of a woman, who knew what she wanted, was capable of extreme sacrifice to get it, and accepting absolutely nothing less. A rather unlucky character, destined to be always unhappy. Zubeidaa is scripted with much feeling, unfolding in front of us in a compelling way and nice pace, presenting some of the most difficult human choices realistically. The whole cast is brilliant. The dignified Queen, a father guarding the family honour and never forgiving those who acted against his wishes, a mother in the shadow of her husband, finding just as much courage to carry on, Zubeidaa´s prince Charming, who loves her, but fails to understand her... all these characters are brought to life by a joined effort of the script, direction and the actors with utmost precision.

But it is Karishma Kapoor as Zubeidaa who is the brightest gem of the movie. Never has she been presented as beautifully, non of her other characters had such depth or scope. She spent the 90s prancing around with Govinda and Akshay, making faces in David Dhawan over the top comedies, wearing the tightest, shortest skirts and doing some of those „PT dance numbers“, but never has she had as much impact as in here, draped in sarees and with abundant curls styled in a period way. Never before or after did she act or looked better.

The music is weaved into the narrative just as flawlessly, with several gorgeous compositions by the one and only Rahman. Be it loving Dheeme Dheeme, or melodious Mehndi Hai Rachnewali, they have a contemporary feel to them, but still fit the era the film captures. The most poignant of the songs – So Gaye Hain – which returns time and again throughout the film in the background, is sung by Lata Mangeshkar. I never really liked Lata´s voice in the 90s and on, not on actresses for sure, but there are some songs, not really picturized on anyone, that she is perfect for, and this is one of them. The main melody in itself, with our without the lyrics, is enough to make one teary.

Zubeidaa remains one of the movies I completely cried through, because it was just impossible not to be effected by the turmoil and pain of a girl denied her dreams, or mother separated from her child, and woman who believed her happiness, earned with so much difficulty, is slipping away from her.