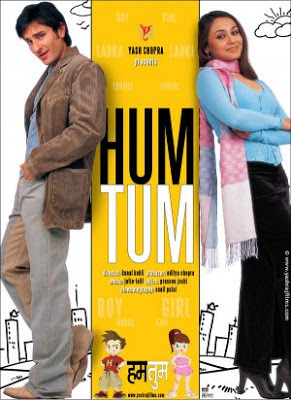 It surprised me greatly how much I enjoyed this film on a second viewing after not being impressed by it the first time around. Usually this isn´t the case, rather you find yourself underwhelmed (or even embarrassed) by something that made you cheer, but watching it yet again ruins the magic, reveals the flaws, until you brush it aside with apologetic smile. I suppose the knowledge of what to expect actually helped the movie in my eyes, because previously I have been looking for something epic and genius (yep, another film over-praised) – and that just isn´t there.

The story is not that complicated so you wouldn´t be able to guess who ends up with whom in first five minutes. As soon as you see flamboyant, free-minded womanizer like Karan (Saif) and serious, sophisticated and elegant Rhea (Rani), you get the drift. They are to hate each other at the beginning and throughout the film he will realize she is not snooty and she will find out he is not useless. And they will fall in love. And you are right. From sight-seeing in Amsterdam, through brief meeting in New York we actually cover several years to find Rhea getting married to Sameer (Abhishek Bachchan in a short cameo), while Karan seems not to have changed at all. And another time shift – a year later: our leads find themselves in Paris. Karan unchanged, Rhea a widow, even quieter, more melancholic and introverted than before.

But indeed they finally find a way to each other, indeed they meet a few obstacles in form of confusion over their own feelings and inability to express them, and indeed they finally walk away from us with arms wrapped around each other. Kunal Kohli in the director´s chair however makes sure to give you a feeling of good cinema, and not just another mediocre fest. It is all about the presentation, the form – and actors, who all give a beautiful performance, although that changes nothing in Saif winning a National award for the film being a ridiculous turn of events. Rani looks utterly beautiful and her outfits are all stunning from wedding attire to a pink saree she´s wearing near the end.

I was extremely delighted to see Rati Agnihotri (as Saif´s unreasonably young mother – there is only 10 years between them, but oh well, it´s Bollywood aka Sexistville), even more so since she did have some very nice scenes, and I was even happier when Rishi Kapoor appeared (as Saif´s father), and actually squeeled when he and Rati shared a frame for a few moments. Kirron Kher pulls off yet another loving and funny mum, not failing to charm. Her whacky, loud Maa characters can certainly get tiring, but if you manage to keep her films apart and don´t watch them too soon one after another, it does strike the right chord.

So – why wasn´t I smitten the first time I watched Hum Tum? I expected seriously too much. As nice as the film is, it is no incredible piece of art or iconic romance. It doesn´t really stand out from the crowd, even though it belong to the better part of it. It is rather slow, and at times it drags. Saif doesn´t look his best. And the animated bits with two positively evil looking adolescents/children (?) are annoying and uttering some of the most clichéd dialogues. They are supposedly trying to tell us in what stage the relationship between Karan and Rhea is, but in fact they come off as completely unrelated. And not funny. And in the end they are two animated children. Who „fall in love“ with each other. Eww. Perhaps the animated little devils could have been growing up throughout the film?