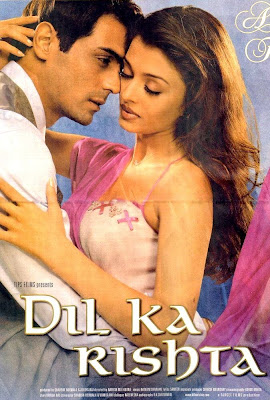 Was this a film or an Argentinian soap opera? Can´t decide for the life of me. It reminds one of a train wreck (or should I say a car wreck?) - you inwardly know from the start it´s going to be horrible to watch, but you just keep on watching. Mostly because you have no idea what to do and the feeling of being utterly helpless against silliness they are trying to sale you by being all so serious. This is definitely one of those films one wonders how did everybody manage to keep a straight face.

Arjun (with some really weird, unflattering hair that kept distracting me) plays a wealthy guy Jai, who supports charity and has a habit to talk to his dead mother´s anklets in time of need. He falls in love literally on the first sight with a beautiful teacher Tia (Aish) and soon after proposes to her. Much to his unpleasant surprise Tia is already in a relationship with a perfect guy, and hence Jai has to satisfy himself with creeping up on the couple here and there with painfully unfitting joyful music in the background as he does that (Hey hey hey... la la la.....). After he drinks too much one night, Jai causes a car accident. He survives, but his friend Anita (short and useless role for Isha Koppikar) dies on the spot as well as – gasp – Tia´s husband! Tia herself survives, but looses her memory. Her amnesia is that special Bollywood kind (see also Jab Tak Hai Jaan) when reminding her would kill her you know.

So now we have Jai, who, instead of going to jail for killing two people because he was driving totally drunk, offers Tia´s mom (Rakhee fuming flames and basically just waiting for Karan Arjun even though she´s in a different movie) he would whisk her, Tia and Tia´s little son into South Africa, where nobody can remind Tia of her past, and he would tell her the baby is his and Anita´s. Tia accepts all this without questions and pretty much from the next day till the end she keeps blabbering how important it is to move on from those who died (HA! If only you knew you´d be the mopy one!) and does everything in her power to romance Jai, who in his turn has bad conscience.

Indeed, every ten minutes felt like an episode of a soap opera, with mood swings and silly reasons for action. The ending is abrupt and pretty much useless. If you´re waiting for some drama when Tia remembers – she is probably the first on screen character who doesn´t and happily falls in the arms of her old creeper.

Arjun is a poor actor. I used to be quite impressed by him, but more films I see the more clear it is to me how limited and repetitive he is. There is no passion in him, and while his voice is pleasant to listen to, the intonation is far from being utilized. Aishwarya is better than him, but as much as I think she rocks in subtle, quiet, dignified and mature roles, she is a major pain in bubbly/funny/girly ones – and this is one of the latter. Somebody should stop her from laughing on screen! She dances beautifully, but no song is truly memorable, and to put give you a shocking news, I don´t think she looked good in the film either.

Dil Ka Rishta is a bubblegum nonsense, a kind of story I imagine Danielle Steel putting together to make some of her female readers teary-eyed. Not worth your time if you´re looking for recommendation.