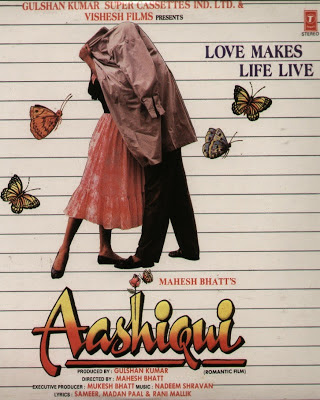 There is nothing particularly great about Aashiqui in terms of plot, direction, visuals, story-telling or performances. Yet it still manages to be enjoyable, even though it probably won´t leave you awed and amazed. It is easy to see why the movie would appeal to young people who were coming of age and falling in love in the early 90s, and the characters may very well be relatable to many. In a way it reminded me of much more recent Ishaqzaade – a forbidden, seemingly impossible love, and most importantly two leads who are always high on emotions and not using their brains too much. Young, foolish and obstinate. Yes, definitely something to relate.

The love between Rahul and Anu, who come across each other all drenched from the rain at a police station (where one was brought in for creating a ruckus at his father´s new marriage and the latter tried to run away from a hostel for orphans) happens, because it just does. That forever-wala pyaar, for which you are willing to randomly burn yourself with a candle or cut your wrist with a piece of glass. That pyaar where you have absolutely no idea who the other person is (like what if they kill puppies for fun? Would be actually interesting to see a Bollywood film where the two falling in love are actually anything but good and honest people with understanding for each other). But whatever. Even without reason, this love does look passionate and convincing on screen.

The two halves of the film actually feel like two different films. In the first it is all about getting Anu out of grasp of her hostel manager, who seems to think that all the girls in his custody are his property, and he treats them like it, lowering their self-confidence, threatening them with the nasty world outside the hostel walls and being simply a tyrant. The lengths to which this character goes to to keep Anu under his control are just too unbelievable and way too obviously thrown in to show us the madness of the two young lovers. And so they run and they sing and run again, until we reach the second half, which completely abandons the previous plot and moves onto more mature goal – Anu wants to prove herself and become something instead of just marrying Rahul and settling down – something I appreciated. However her independence and success (which comes as she glides through a modeling competition draped in stunning Indian attire while everybody else is given fugly 80s frocks) become yet another obstacle in the relationship, because you know, male ego is a stupid thing.

As unattractive and awkward looking as Rahul Roy is, he doesn´t make a bad pairing with Anu Aggarwal, who, unlike him, is dusky and with unique, sharp features. Both were average performers, she, again, slightly better. The fire-breathing, saliva-spitting, permanently immagonnahaveaheartattack looking white hostel manager is completely over the top and maniac, of whom nobody would ever approve as a person who should run anything, forget a string of orphanages. Deepak Tijori is as adequate as in any other of his films. It really seems he has done one sole character in his whole career and just smuggled it into every film possible.

There is one great thing about Aashiqui though. The soundtrack. Extremely melodious and pleasant, with fitting lyrics. And the songs are plenty – the film is pretty much just the characters mouthing few dialogues and starting singing at every occasion possible. Happy song, sad songs, songs about longing and song to defy all odds – every kinds of a song you can think of, Aashiqui has it. The film is strictly average, but the soundtrack itself raises it a few levels up.