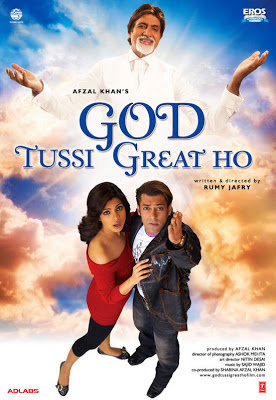 God Tussi Great Ho. And forgiving also. Otherwise You would have struck down the makers of this film with ten plagues of Egypt. There is no justification whatsoever, no excuse great enough, for the existence of this movie. A blunt remake of Hollywood film „Bruce Almighty“ is even more appalling than the stupid, but still enjoyable in bits, original with whacky Jim Carrey in the role of an ambitious, but unlucky TV journalist. Indian version gives us Salman Khan in his stead.

Arjun (Salman) is not only poor and unsuccessful, but he also doesn´t get along with his father, his sister is considered ugly, and his gorgeous and popular female colleague Alia has no incling whatsoever he is hopelessly in love with her. This young and healthy man, who has a house, family, 5 meals a day, a job and a potential girlfriend, however considers himself extremely unlucky and stubbornly believes God is against him in every way and plays His dirty games with poor Arjun for His own amusement only. Arjun curses God, calls Him names at every opportunity, and even more so after a new guy appears in the office and soon takes over not only his job but also steals his ideas and potential girlfriend. Now, wouldn´t that make you angry? Damn.

God finally decides to give Arjun a proper lesson, and hence He has a personal talk with him and gives him all His powers, to make the world better according to his own judgment. Need I say that within days Arjun majorly screws up? And realizes God is right? Who is surprised raise your hand.

As I said before, the original film too was anything but great. But it was reasonably well acted, and most importantly.... it was here first (I dare not call it an original because my experience taught me very few things in the world are actual originals....). There is little to no difference between storyline, except of course Bruce made Jennifer Aniston´s boobs grow, and Arjun, being a nice Indian ladka (sporting shirts that would make Rishi Kapoor´s sweater collection proud) he makes his potential girlfriend a future bride.

God Tussi Great Ho is extremely poorly executed. Salman is just pathetic, going through his dark phase between excellence that was Tere Naam and reinventing himself with Dabangg. His brother Sohail is, ironically, better in this (not a great deal considering how horrible everyone was in this film), then again he really isn´t someone you´d want to watch on screen. Priyanka Chopra is breathtakingly gorgeous, yet annoying and unconvincing. Then there is God playing Amitabh Bachchan.... I mean Amitabh Bachchan playing God, but apart from his amazing voice there is little that would make you go wow.

The most cringe-worthy thing were definitely cheap CGI effects, that looked like a video game from the early 90s. Nothing looked real (or even pretty), and truly all was so artificial I started to doubt the film actually released in 2008. The only bearable bit of the whole film was Laal Chunariya song, which at least took the advantage of Priyanka´s beauty.

A comedy that is not funny is one of the most painful cinematic experiences one can endure. Looking back I can´t believe I actually sat through this movie, which easily ranks among the worst I´ve seen in my life. Spare yourself the pain. It is not worth it, not even if you are a fan of the actors. Unless you want to see God pulling off some bad Bollywood moves.