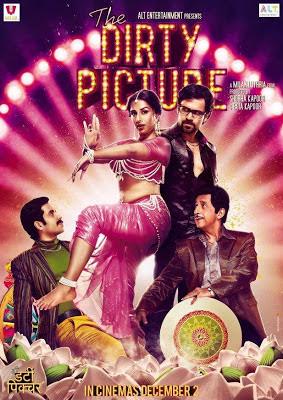 What Bhandarkar attempted to do with „Heroine“ (and messed up), Milan Luthria did before him (and did not mess up). No matter if present or the past, the message is clear: it sucks to be a female filmstar. We all know that. It has been talked about for decades. And nobody is doing anything about it, not even The Dirty Picture. After all, as long as we get such tragic and sad stories of lives ruined in a pursuit of stardom, there will be material for film scripts. A story like that of the 80s actress Silk Smita, on which is the film based, though it doesn´t religiously follow her life or characteristics.

A village girl Reshma runs away from her home and mother to pursue her filmi dreams. However she faces rejection on all sides and with every rejection her enthusiasm dies a little and her frustration grows. Until she decides to go „dirty“ - taking up a highly suggestive dance number and completely knocking breath out of everyone. Sex sells and she quickly becomes a sensation. However after some time of doing raunchy, meaningless roles, it all becomes the same to her. Success is no longer sweet and Reshma, now known as Silk, is hoping to branch out of her sex Goddess image. And suffers a nasty blow upon realizing nobody cares for her in any other than her dirty avatar....

It is all definitely dirty, the first half more than the second, but the second actually shows dirtiness of human soul, which is ultimately much more vulgar than dirtiness of showing off of flesh. There is a definite feeling of sadness from the first moment, because you just know it is not going to end well. Somehow it just cannot. But all the sadness feels rather superficial, as way too much time is spent on lingering on the nastiness, and way too little time is given to the actual character of Silk. We see what is happening to her, but we have no idea how she feels, why she feels that way. There is no real contact between the viewer and the character.

The film does great on the visual level. The 80s are bright and alive and you would expect Jeetendra in white shoes prancing around Jayapradha to appear at any moment, and it wouldn´t look out of place. Especially the picturization of the famed Oh La La song (the best track of the album by the way) is bit of an visual orgasm with all the pink vermillion and painted pots and shirtless Naseer and drenched Vidya for me. It represents Indian cinema of the time perfectly – with all the over the top and larger than life factors. It is so much fun, yet never feels like disdainful scoff.

Vidya was excellent and owned the film completely. She was Silk and made her a truly 3D character, not a caricature. I appreciated that she was so real, with all the rudeness and boldness, but in the end just a normal woman with in need of appreciation and solid emotional ties. And some basic respect, which she did not get, because audience, back then and even now, has a difficult time understanding that a woman enjoying and displaying her sensuality does not equal a classless prostitute.

Emraan had really nothing to do and in what he had he seemed incredibly wooden, his voice over throughout the film was atrocious and without any change of intonation whatsoever. Him looking like Anil Kapoor and having pretty much same mannerism do not help him in my eyes. Naseerudin Shah is a pure gold as ever, and a wonderful cast choice for an aging 80s hero who is accepted as forever young, while his heroines are turning into „mothers“ after few years in business. The biggest surprise has to be Tusshar Kapoor in a role of his younger brother, who too has a thing for Silk (only up until the moment he realizes she has no intention to sacrifice everything for him and become a „decent“ woman).

Good, but still overrated picture, at least as far as awards and critical appraisal goes.
Posted by Gaja Gamini at 12:58