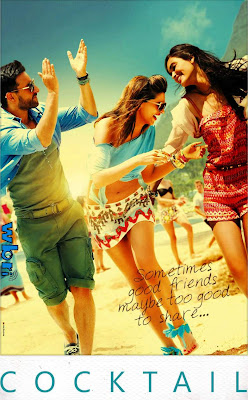 When a young girl Meera from India decides to move to England where her husband lives, she is in the shock of her life. As it turns out the husband has no interest in her and only married her for money. He throws her out of his life and she finds refuge with Veronica, a young, beautiful woman whose entire life is big wild party. Soon they are joined in their apartment by Veronica´s boyfriend, a notorious flirt and womanizer Gautam. And things get rather complicated when his mother mistakes the traditional Indian girl for her son´s life partner instead of free-spirited Veronica. And even more troubles are on the way, because somewhere in between all the pretending, Gautam begins to fall for Meera and she for him....

Been there, seen that? Sure. Still Cocktail is not a waste of time and makes for a fairly good movie. It has enough of both fun and emotions to keep you occupied. There are negatives of course. For example Saif and Deepika are not a good jodi. She is too tall for him and he is too old for her. While Saif has a great comic timing and can be genuinly funny, he seemed rather out of place among the young girls, and his appearance somehow took a bit from him being completely convincing in the role. Diana Penty as Meera gives a confident debut, her portraiyal of a quiet Indian girl was nicely sensitive. And she looks really pretty which never hurts. I was actually quite surprised at the amount of screentime given to her, in fact I think she was the main female lead.

The showstealer and life of the movie however is unquestionably Deepika Padukone. She has not been as gorgeous on screen since Om Shanti Om, and needless to say her efforts and work are finally showing. She has improved drastically as an actress in the past five years. I always liked her, though it had more to do with her beauty and also visible effort she put into her work, but now I can finally say she definitely belongs among the finest crop of the new actresses. The relationship between her and Diana in the was wonderful. While the first half of the film is a light entretainment, the second holds a feeling of unmistakable sadness. I sincerely felt for Deepika´s untold sorrow and impression of being completely lonely. She made my eyes teary. So afraid to be alone, to be deprived of all the love, that she was willing to change herself completely into a picture she believed Gautam would like.

The ending itself somehow ruined the mood for me though. True enough, I think Gautam and Meera ending up together was inevitable, and one wanted it for them as well. After all Veronica did not really love Gautam I trust. She fell in love with the sense of security, with the unity of a family she suddenly was presented by his mother, uncle and even Meera. Shown as a child from a broken home, she was inwardly longing for a stability, a relationship that would last forever, and the idea that a marriage, home and children are not destined to her nearly destroyed her. Yet the finale itself was somehow thanda and didn´t fit the rest of the movie. I also didn´t understand the character of Meera´s husband. Why would he suddenly change his mind? Even to an extent of wanting Meera to stay with him? Did he have a bad conscience? If so, it was never shown, and so we are bound to wonder.

To note down a few more things - performances by the supporting cast, namely Dimple Kapadia as Gautam´s mother and Boman Irani as his uncle, are a real delight. In fact Dimple was so excellent I wished she had more scenes, like this it only seemed to be an extended cameo. Music is rather average, no song stands out. What starts as a typical romcom evolves into a very touching film about relationships, out of some are more powerful than love.