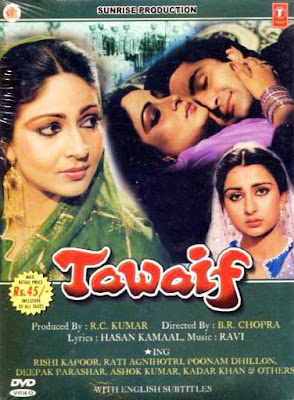 Since few days ago it was Rishi Kapoor´s 60th birthday I decided that I should review a film that actually made me change my opinion about him. Originally I knew him as the fat and awkward guy who romanced girlshalf (and quarter) his own age, and if anything I found him ridiculous. But then he grew onto me in his father roles, and finally I thought it was about time to watch some more 80s and chose Tawaif with Rishi in the lead role. Attracted primarily by the title (I have a thing for Bollywood tawaifs/prostitutes/courtesans), I was presented with a very nice film. And Rishi was suddenly cute instead of ridiculous.

Dawood, a young man in possession of a one room apartment in a friendly neighbourhood and working for a publishing company, meets a beautiful young girl Kayanat, an aspiring writer. She is naturally overjoyed when Dawood introduces her and her novel to the publisher and all seem to be going well both for Kayanat´s career and Dawood´s love life, as he soon enough finds completely enchanted by her. However then one night Dawood opens to the door only to have a tawaif forced into his house by her pimp escaping from the police. All the protests are in vain and Dawood, in fear for his life, has to take the woman, named Sultana, in and that for quite some time. For the matters to go even worse his neighbours find out about her existence the very next day, and assume Dawood got married in secret. And to avoid embarrassment both him and Sultana decide to go with the flow, letting the neighbourhood to celebrate their fictional marriage while they sleep in a room divided in half by curtains. As the time passes, Sultana becomes favourite of everybody around – except Dawood, who is still pining after Kayanat....

Rishi is quite adorable as poor but honest Dawood. Indeed suddenly I was able to see why he used to be so popular when younger. Far from being exactly good looking, he had cuteness written all over him, not to mention his comic timing was wonderful, and there are quite a few scenes in the film where he can prove that to you. His initial disgust over Sultana and frustration over not being capable to romance Kayanat are a source of some good humour when they clash with Sultana´s quick adaptation to her new role of his wife.

Rati Agnihotri makes Sultana a beautiful, interesting tawaif character. She does not have the depth of Chandramukhi from Devdas or Gulabji from Pyaasa, but she combines excellently the vulnerability of a woman for sale and rather unladylike behaviour taught by "her world". As weird as it may sound I found her a "fun" prostitute (sounds even weirder now that it´s written down). I did not like though how the film made it sound as if a tawaif wasn´t a woman, but some low species unworthy of breathing air (I sense some strong Pakeezah inspiration here). Rati is the showstealer, even though Rishi acts very well as already mentioned, and Poonam Dhillon in the supporting role of Kayanat does her job with sincerity too.

The finale though, was kinda hilarious instead of touching. So the whole community somehow makes their way into a brothel of all places to claim Sultana, not one of them suffers of prejudice against her profession. The pure naivity and cheeziness of it made me laugh, but I am almost never against heart-warming (even if unrealistic) endings.
Posted by Gaja Gamini at 13:34