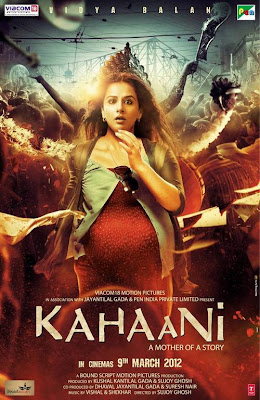 Is anyone actually going to believe me that what happens in the end was actually my very first thought of how it´s going to be at the beginning? The revelation at the ending was a crowning jewel of Kahaani, but my own suspicion took away a bit from its impact, that would make it a really „wow“ film for me. Even so Kahaani is among the most quality stuff we have been served in a long while and it is probably the best movie of 2012 so far. It is different in more ways than one (from „usual“ stuff Hindi cinema produces). There are no lip-sync songs, there is no love story, there is, actually no dominant male hero. Not that I don´t love all those, after all why else would one watch Bollywood.

Vidya Bagchi, a heavily pregnant woman, arrives to Culcatta and with her priorities sorted out she goes straight to the police station, demanding the force starts looking for her missing husband. But as it turns out quite soon, this is no ordinary case. Not only the person is missing, but everything suggest he never existed either. Then again here is a woman pregnant with his child and with his photo and information one could not just make up. And things become even more mysterious when secret government agents step into it all, trying to convince Vidya to stop looking. However she is obstinate and determined and with a help of a police officer Rana, who is nurturing tender feelings for her, Vidya is slowly uncovering an elaborate plot of happenings and connections...

Kahaani has possibly the best (read the most „have a heart-attack dear viewer“) intermission scenes, which really has you cursing the pee break in the film, ever, and if there would still be the Best Villain award, then this year Rishi Kapoor would have had a serious competition from Saswata Chaterjee as „Namaskar. Bob Biswas. Ik minite.“ guy, who has to be one of the most freaky and scary cinematic bad guys in the world. Hidden in a plump body and behind strong glasses, there is a vicious and cold blooded killer hiding within a seemingly completely ordinary average insurance agent.

Overall Kahaani is a very good movie that at times seemed too slow, but the ending made it all justified and definitely lifted it up. The suspense was there as well as thrill and grip, but it was not over done or over-dramatized. Up until I read some other reviews I didn´t really even think about plotholes, which seem minor anyway. It is a film that has you thinking, not just feeling – the latter being much more essential to Bollywood movies in general.

Brilliant cast of largely unknown actors is dominated of course by Vidya, that gorgeous woman who had won me over a long time ago. Here she is definitely more sensitive than in pretty much overhyped The Dirty Picture and much much more moving than in rather boring NOKJ. Her performance deserves a serious praise, although yet again Parineeta stays unconquered. She represents so many elements within the film. Helplessness, inner strength, determination, and then also turning ill-treated and finally punishing the sinners, taking in a way a form of Goddess Durga, who is also present during the whole finale thanks to the setting of the movie. I really loved the atmosphere and portraial of Culcatta. I have never been to that city or India even, yet the movie provides what seems a very genuine representation of it. At times one can almost be under impression you can smell and breathe the air of the town, which thus itself becomes a performing artist. What is admiration worthy is also the fact that apart from being well cast and well acted, the film is also wonderful and polished from all technical aspects too. The camera angles, the lighting, the editing, blending of the music score, some really powerful yet not larger than life dialogues.... Kahaani is a film Bollywood can be proud of.