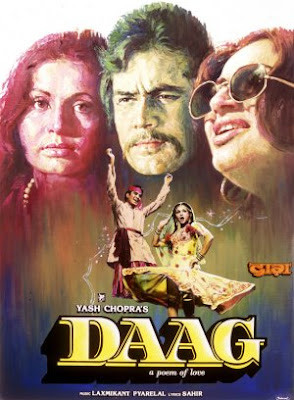 The complete title is Daag – The poem of love, heralding right from the beginning that you are in for something cheesy and self-indulgent (though the latter not by far on the scale Yash Chopra started doing films in the 80s. Indeed compared to lavish Veer-Zaara, Chandni or Dil To Pagal Hai poor Daag looks like a disowned relative nobody talks to in family gatherings). It is also not „a poem of love“, unless you call bizarre romantic. Because bizarre, perhaps even with a capital B, it is. 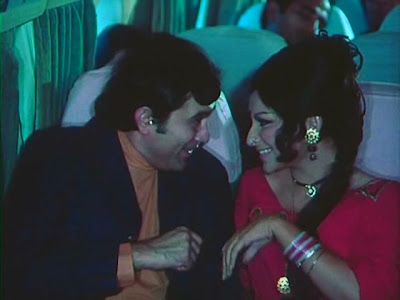 After accidentally killing a man trying to rape his wife Rajesh Khanna escapes from the police, leaving bechari Sharmila Tagore pregnant and thinking he died. However as destiny would have it they meet again several years later, with Sharmila having a son and Rajesh having a huge moustache, bungalow, daughter and Rakhee Gulzar for his wife. Oh the drama! I was really curious at this point at how is Yash Chopra going to solve this one in order to please general public. But I was disappointed when it became clear that Rajesh is in fact not married to Rakhee and he is not a father to her child. He only told so everybody so to save Rakhee from gossip, because her lover had ditched her once she told him she was pregnant. And then Rajesh spent 5 years with her under one roof, with her million rupee daddy sponsoring them, growing a moustache, but he never even touched her, because you see, he loved Sharmila. As to why in the world did he never ever even tried to find her up (with millions at his dispose that wouldn´t have been so difficult anyway) is never explained. 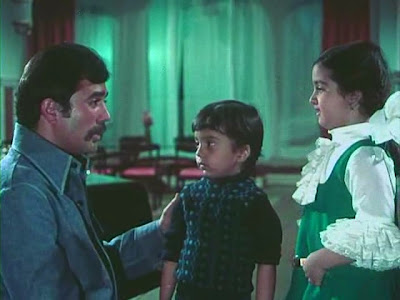 But even his „marrying“ Rakhee is as bizzare as hell. I for sure wouldn´t bring a random person from a train station to my home in the middle of the night, spilling to him what the rest of the world must not know and accept his immediate proposal for „marriage“ within an hour. The ending however was the most bizarre thing of all, with Rajesh and Sharmila being reunited (thus making Rakhee´s undesirable situation known to the world – which previously was that very thing they tried to stop the whole time) and choosing to live with Rakhee and her father in one household, because "their relationship is unbreakable now". BTW Rakhee was the one with millions and bungalow while Rajesh and Sharmila had, as we say in our country, naked butts. But Sharmila makes this decision seem like she is actually making a favour to Rakhee,who by the way is in love with Rajesh and thus making the whole thing even more questionable (urgh... how exactly did they arrange the house and bedrooms? And how the heck they explained it all to the kids?) 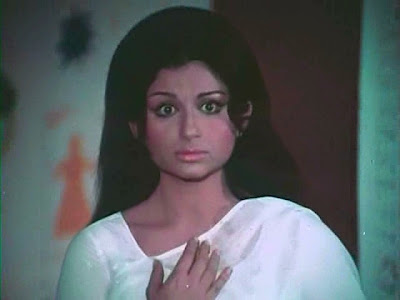 This was only my second film with Sharmila and Rajesh respectively. Rajesh I have previously watched in Khamoshi, but that one was completely Waheeda Rehman´s show. Here he showed me he had a beautiful voice, but was not really good when it came to being angry or agitated. It felt too fake really. Sharmila did well (and surprisingly was not a representative of what we today call „a Yash Chopra heroine“ aka looking like a heaven-sent creature), but the one to really capture my attention and sentiments was Rakhee. She was different in her approach than Sharmila. More focused. Less conscious of the camera. She was becoming her character with great conviction. And her character deserved so much better.

All in all I don´t think Daag is a great film. And well, I don´t think Yash Chopra is a great director either. My love for some of his films is rooted usually in performances and performers, sometimes also music. But it rarely has much to do with his direction. The self-indulgent, epicness-boasting titles do not help either.
Posted by Gaja Gamini at 14:55