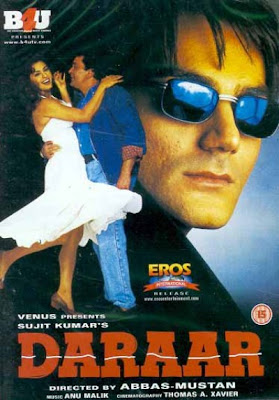 A very good thriller, Daraar is actually just one of the three (or perhaps more?) Hindi remakes of successful Hollywood film „Sleeping with the enemy“, that had Julia Roberts as the main lead. I have not seen the third one (Agnisakshi – that is promising to be a real thrill ride by just having Manisha Koirala and Nana Patekar) as yet, and so I have only Daraar and Yaraana (1995) to compare. Daraar is easily superior as a movie overall, although both films have painfully unnecessary humour subplots and Rishi Kapoor in his acursed awkward 90s phase as a very unlikely hero. Other than that a several more plot holes the Abbas-Mustan duo did a good job with the movie.
When awkward looking Rishi, playing a bohemian and popular artist (as he often did in films where he was named a hero but was pretty much just a prop) spots a beautiful, fresh Juhi Chawla running with her little lamb among the green hills, he immediately falls in love. After a time full of her rejections, because she obviously is not excited about a man in her life, and Johnny Lever tomfoolery, she finally accepts Rishi and the two start planning a wedding. But then it turns out that Juhi has a dark secret – she is already married.
Indeed! Much before Rishi it was a debuting Arbaaz Khan who flew into her life in a helicopter and absolutely enchanted her with wild dance moves on a sunny beach and later among casino roulettes. So much she married him. But soon after moving into his house, which is cut off from most of the world, one gets a hint that something may not be completely OK with the guy. 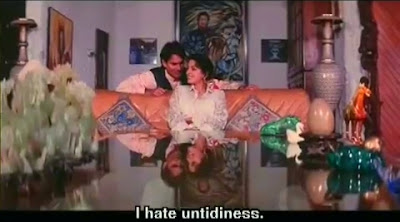 Not only he hates untidiness, but he quickly turns out to be obsessive, possessive and jealous sadist, who beats his wife should anyone even see her through a window. And so Juhi finds herself locked in a perfectly tidy and neat house with nothing but perfectly positioned pillows on the sofa. And to her utter horror her neighbour, a doctor completely ignorant about how mental that guy next door actually is, comes for a visit. This results in her being yet again severely beaten – and doctor killed. 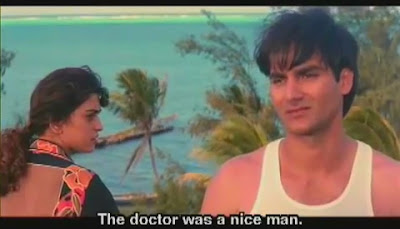 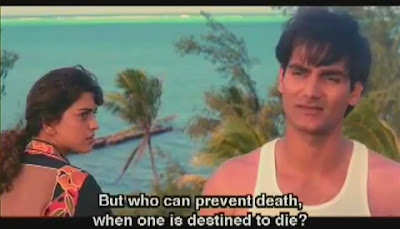 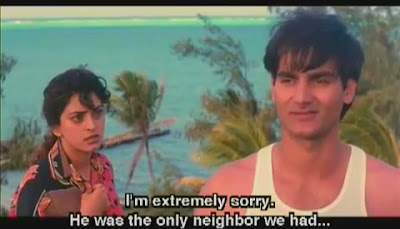 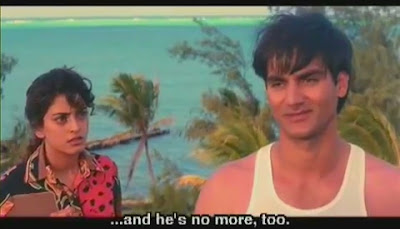 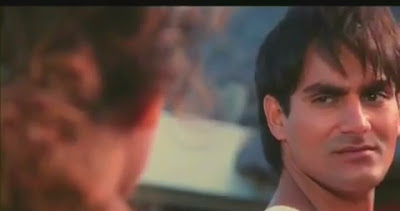 Scared for her life Juhi manages to run away, even successfully faking her own death so she has certainty her psycho husband will not look for her. But as soon as she can breathe in peace, she meets Rishi.... who paints a portrait of her..... and it is published in the newspaper....
Juhi was really amazing in the second half (as in the first Rishi and his dream-sequencing took most of the time), and unlike in Darr where I found her innocent damsel in distress disappointing, she actually does something for herself. She is both vulnerable and powerful, and yeah, she looks gorgeous. Her portrayal of the abused woman, who simply decides that enough is enough, is extremely sensitive and believable. She breaks your heart pleading with her husband as he prepares to give her a beating, you fear for her in her plight, and you are proud of her once she faces him, tired of endless running. Her pairing with Rishi is plain weird, but in the end ALL 90s actresses with Rishi are weird. Arbaaz was a damn psycho. He just looked menacing and creepy, and as long as he didn´t speak I thought him brilliant. His dialogue delivery though....ouch. The guy is just so emotion-less. 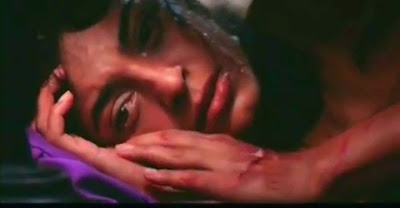 The ending however takes away from the movie. So after EVERYTHING he did she is all bonkers about saving him? Ok OK OK. So we just POSSIBLY MAYBE could explain that one. But he suddenly turns a good guy? That absolutely didn´t fit. In this one aspect I found Yaraana´s ending much more satisfying and plausible - with the heroine herself actually stabbing Raj Babbar and than laughing and crying at the same time (of course Rishi Kapoor had to be the one to finish him off completely, as that apparently was a man´s job).
Posted by Gaja Gamini at 15:41