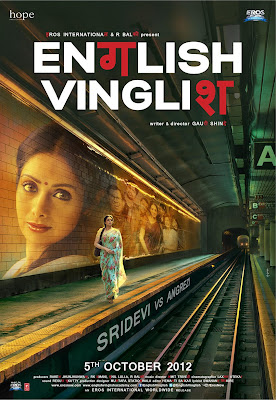 We can now sleep a bit more peacefully because we have Sridevi back in films. In times when we are really to applaud even a decent performance by some of the Bollywood top stars it is extremely refreshing to see a person like her making movies again. She has always had talent and screen presence, and both remain undiminished. She is looking great for her age and her expressions are still beautiful. True enough – till this day her dialogue delivery is far from perfect. But Sridevi was clever enough to turn this weakness into a strength – by signing the dotted line of English Vinglish, a film that is all about troubles with language - and some more troubles you pick up along the way.

The film tells a story of Shashi, an ordinary Indian wife and mother of two (out of which one is actually a bit too small for you not to wonder how old is Shashi supposed to be. Sridevi looks younger than she is, but not as young for you not to try and think is she had this small child after she was forty? Possible of course....), who lives for her family. Caring about their every need, she definitely doesn´t feel her life would be wasted and she doesn´t complain. She is happy with what she has. The only thing that takes away from her being content is that her children and husband almost daily remind her she doesn´t know English. They tease her about it (in better case) or are annoyed with her for it. Shashi does not seek a way to prove them wrong. And even when an opportunity comes her way, she takes it not to show them how horrible they are (which would be completely understandable), but for herself, to gain some confidence.

Shashi´s departure for America, where she is going for a month to prepare and attend her niece´s wedding, was a bit too mopy for my taste. It actually looked like Shashi was leaving her family forever never to return. I understand it was meant to show how distressed and scared she was about stepping into the unknown, but considering all her journey was getting from a car at the airport and getting into a car at another airport (all including family members), it showed her character as perhaps too weak for getting more sympathy. There are limits. And there are more little flaws in the film. They have more in common with one´s thinking and outlook than with the script. For example I found the behaviour of Shashi´s daughter completely unacceptable. I cannot imagine ever talking to my mother like that, not even when furious, because our upbringing was such, and here was a little girl intentionally humiliating her mother – and she was allowed to do so, because neither of her parents bothered to correct her ways. You brought this upon yourself, Shashi. Not feeling sorry for your lack of parenting skills. A scene I sincerely disliked though, and that for me pretty much betrayed the main point of the movie, was when Laurent and Shashi laugh at the fat girl in the subway. Considering Shashi has issues at being ridiculed and put down, this was very nasty of her, one would think she would not do such a thing, especially because with a fat person you can never tell if they are not ill or anything (and even if they are not, it´s simply not done). She and Laurent could have bond over ANYTHING from baquettes to basket full of labrador puppies - but no. Let them laugh at the fat girl.

It is curious that Gauri Shinde did not have any name in mind while writing the story and character of Shashi, because she fits Sridevi perfectly. The shyness, the self-confidence just waiting to be woken up, the struggle with a new language, all that fits Sridevi perfectly – and she melts into Shashi almost literally. It is impossible really to imagine any other actress in the role, she made it her own. Rest of the cast ranks from good to tolerable. I for one was not smitten with Mehdi Nebbou´s long stares and preferred next to everybody else in the class to him (I kept wondering if he knew Shashi was married and if he did.... what exactly did he expect?). Adil Hussain, Priya Anand.... all of them together created Shashi´s reality, but in the end one cannot really talk about performances because it was really all about Shashi and her reactions to them, not about their view on her. It was about little things that were Shashi´s everyday life and that seem more important than anything to women like her. The only exception is the short and delightful cameo by Amitabh Bachchan. In those few minutes he has in the film he steals the show with his comic timing.

Music, editing, pace and visuals again – fitted. The parts on their own may not be amazing, but together they work well. Some of the dialogues are truly wonderful, even thought-provoking. “Do all important things only happen in English” is one of them. And I was very impressed by (quite revolutionary for a Hindi movie) “I don´t need love. Just a little bit of respect” line. I think the greatest strength of English Vinglish, that also resulted in its success at BO, it relatibility to Shashi by thousands (and possibly millions) of women who are like her – dedicated to family and pretty much taken for granted. Shashi emerges as an inspiring idol, who shows that you can have your confidence, feel good about yourself, and there is no need to make dramatic scenes or doing something extremely drastic. I personally could not identify with her (I am neither a housewife nor a desi for that matter), and she did not remind me of my mother (or any other woman from our family, I guess we treat them better) which takes away from the impact of the film for me.

Sridevi struggles with a word „judgemental“ in the film – which, on a plus side, is anything but. There are brown people and white people and „yellow“ people and gay people in the film, all side by side. And nobody has a problem with anyone. The behind-the-scenes-star of the movie, Gauri Shinde, thus gives a lesson in tolerance, without being preachy, but true enough - the film is often riding on stereotypes (OTT gay teacher, lewd joke in the classroom.....), which takes away from the charm a bit.

English Vinglish is a very good and sweet movie that did not left me teary-eyed, but with a smile on my lips. Both Gauri Shinde and Sridevi deserve a big congratulation. Gauri for writing an original and unique script and bringing the best out of her cast, Sridevi for her comeback choice and sensitive performance. It is not about learning English after all.