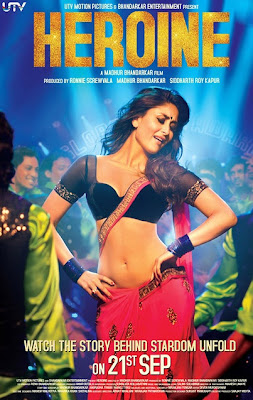 Rather tiring, though not without potential, Heroine wanted be a glimpse into the "real" dynamics of the "reel" world, but it doesn´t offer an engaging story. Comparing this work of Bhandarkar´s to Fashion is not in place at all. Fashion had tempo, drive, progressive storyline, more than one interesting character. It was a good film. Heroine on the other hand is a never ending depression without the taste of success and cannot boast of anything - with the exception of Kareena Kapoor. Not even the glamorous bit of what is Bollywood is shown. Parties seem boring, photoshoots unhappening and award shows on the scale of local school´s recitals. Not even well-costumed but badly choreographed Halkat Jawaani salvages that.

In a way Heroine is not about the film industry or uncovering its vices. I don´t think there is anything that would shock anybody at least a bit familiar with film world and tabloids. Affairs, manipulations, promotional strategies, drugs and alcohol - we have heard about it way too often to be shocked when presented that in a movie today. Heroine is rather like being locked inside Mahi Arora´s mind without a possibility of ever getting out. One cannot see beyond what Mahi is seeing, cannot think beyond what is going on in Mahi´s head at the moment. And since Mahi is way too obviously emotionally unstable and completely unsuitable for the profession she decided to pursue, one feels uneasy the whole time. Mahi´s minor ups are immediately becoming deep lows. In spite of the film being completely about her, it is extremely difficult to actually give a proper description of Mahi. There are too many things never told or even touched. Who is Mahi? Where did she come from? Why did she start to act? Why is she the person she is?

Not even her relationships are explored, although they obviously are the most important thing for Mahi. Her mother makes few brief appearances, but we get nothing but some well-meant, yet unconvincing lecturing. We get a glimpse of Mahi´s psychiatrist, who actually gives her an important impulse, but she is lost in the next moment. Divya Dutta proves her versatility as painfully realistic and even ruthless PR, but again, she is completely sidelined. Mahi´s love affairs with two different men are presented in a very one-dimensional way. And there are other people and other relationships presented, but never looked back again. One in particular was wasted - with briefly appearing legendary Helen. There could have been so much to that particular relationship, especially considering the climax.

The beginning seems to be a middle of some other film, the ending is a huge huge let down. After everything Mahi (and the viewer) has been through, we only get 30 seconds of a dull hint that fame sucks when you cannot bear it. Truth is, that the feeling of disappointment is something one gets throughout the whole picture. So many opportunities up for grabs, hardly any taken. When I think about it, we never really even get to know how big star Mahi is. Is she at the top, up there with the greatest, or is she simply just another actress with few hits under her belt, but loosing her position as soon as she makes one wrong step? To me it actually seemed Mahi Arora was some show-piece B-grade starlet whom nobody would take seriously. We get to see few bitchy actresses whom she is pitted against in the race for a role, but there is hardly any sense of competition. In this, more than anything else, I was lovingly remembering Fashion, where the rat race among models was chilling and unmerciful and one could truly feel it.

Kareena Kapoor delivers a nearly flawless performance. She is not over the top, she is Mahi. And Mahi is mad. She is mental and desperate. Eager to learn, but continuously surprised that things don´t last. Occupied by herself and absorbed in herself, pathetically indecisive and not sure of what she wants. I was not sorry for Mahi. She was too unfit for what she was doing and brought most of the bad things upon herself without anybody´s help. At the same time Kareena definitely sends out genuine feelings and emotions. She is not artificial crying machine – something that could have easily happened had some other actress taken up the role. The supporting cast is fine, but without much impact, Arjun´s dialogue delivery was so extremely monotonous I could cry. It was lovely to see Helen. To sum it up Kareena Kapoor delivers, Madhur Bhandarkar does not.