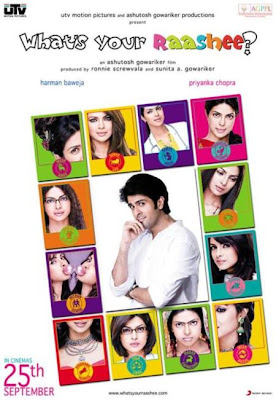 I did not expect much of it and thanks to that I did not find it as bad as some people say. In fact it suited quite well to my mood and I calmly had dinner, corrected few papers for my mum who is a teacher, fed our lambs and did my manicure - all while watching the film. At the same time the fact it fitted my mood does not mean it is a good movie. It is dull, really, and drags terribly – after all it has almost 3,5 hours, that are not exactly thrilling or action-packed, neither do they bring out much of an emotion. So we have an obviously useless member in a family, who not only is good for nothing, but actually makes huge debts for which he could go to prison - so let´s all sacrifice ourselves so we can ensure his well-being. What??? That guy should have just gone in jail. But then again.... there would be no film if he did.

The thing indeed worth watching though is Priyanka Chopra, who does exceedingly well and pulls of one of the most unique stunts ever – she enacts 12 different characters, one of each „rashee“, and truth to be told, she is not repetitive in the least! I definitely could see the differences between all 12 characters she had to deal with, and she really used everything from expressions, manner of walk, signature gestures to manner of speech to full advantage. Sadly everything around her is dull and the dullest of all is the lead actor, who looks nice and dances nice, but completely lacks X-factor. That his character is completely one dimensional nice guy without much of a personality does not help.

The main excuse for 3,5 hours is as follows: The hero, promised by his grandfather he would get loads of money on his wedding day, sets out to find himself a bride. Not because he would be wealth-hungry, but because, as already mentioned, his useless and stupid brother made huge debts and family is willing to do anything to get him out of trouble (I wouldn´t.) Poor hero thus decides to leave everything and starts searching the right woman under a guidance of a match-maker. But because there are too many girls and too little time, so he decides to meet only 12 girls, one representative of each zodiac sign – because obviously ALL people born in the same rashee are the SAME. And in the end he chooses one. Yes. That is all there is to the plot.

I must give the film the credit for excusing Priyanka´s face on all the girls without much pain. Suspicious, but not completely dismissable explanation by an old grandpa, that once you´re set up to find your life-partner, you see them all in one light/with one face, actually didn´t seem that bad... And Priyanka indeed doens´t make you sorry that she is that one face. She looks lovely in all the avatars and captures both huge and gentle nuances that define her characters very well. Be it self-conscious Anjali, mystical (and kinda horny) Bhavna, hot-tempered exhibitionist Mallika, modern feminist Rajni or traditional and romantic (and kinda off-her head) Chandrika (my favourite!), they all are believable and credit goes solely to Priyanka.

What´s Your Raashee is really a film bellow par. It got me thinking though, that as a 12 episode TV series it actually could have been great.
Posted by Gaja Gamini at 16:05