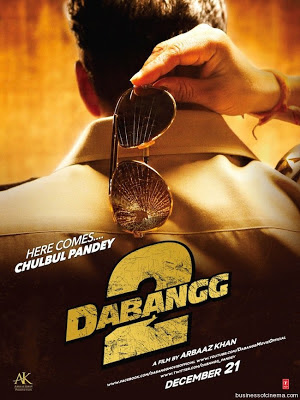 Remember my next to ecstatic review of Dabangg? Well, this one is going to be almost fully non-ecstatic. Because Dabangg 2 is one of those movies that are witnesses to the fact really good films should not be milked just for the sake of it. Most sequels do not turn out as half as good as their predecesors and Dabangg 2 is just another one of those. Not memorable from any angle and relying way too much on Salman Khan´s X-factor as well as overdoing references to the awesome original movie, Dabangg 2 is not a „horrible“ film, but it was probably, together with Jab Tak Hai Jaan, the biggest disappointment of the last year, failing to meet expectations by far.

We meet Chulbul Pandey a lot more joyful, mellowed and chilled than before. He has settled with his wife Rajjo and accepted a transfer into a bigger city. His family life is happy and content. Not only Rajjo is pregnant and glowing (and my, does she looks wonderful!), but his step-father and brother become a full-time caring relatives. The Pandey family harmony takes up the most part of the film and I felt like instead of a masalla film I was watching a TV soap educating me on how a proper family behaves. It does have sweet moments (Rajjo reminding Chulbul he forgot his trademark sunglasses) and funny moments (Pandey sr. getting fake calls from an unknown „lady“), but there is really nothing much to talk about. This storyline was still the best one – which doesn´t really shed favourable light on the rest of the movie.

If you are making a sequel to a movie that had a truly menacing and memorable villain like Sonu Sood as a corrupt politician, you absolutely need a villain even more menacing, memorable and ideally even more corrupt. And saying he is like that, not showing it, is just not enough. That Prakash Raj is among the finest when it comes to being a villain has been proved in the past more than once. However Dabangg 2 doesn´t take an advantage of having him in the slightest. There is not a single scene in which you would actually feel concerned for Chulbul, because his enemies seem helpless in spite of some threatening. The way the villain is weaved into the story (or rather lack of it) is too predictable and almost copied from the previous film too. Chulbul insults the corrupt guy. Corrupt guy threatens Chulbul. Chulbul is not afraid. Corrupt one kills/harms a member of Chulbul´s beloved parivaar. Chulbul wrestles shirtless with another shirtless villain. Chulbul kills the villain. The end.

Referencing to the previous movie is fine, as long as it´s not overdone, but Dabangg 2 does just that. „Chalte hain“ becomes „Aate hain“, the „you´ll be confused from which hole to fart“ is back as well as a guy with mummy calling him in the least appropriate moment. There is an item song, just lot less fun than Munni (and Kareena Kapoor does have adorable expressions but cannot dance for peanuts), we get Munni, just lot less fun than last time, we get a song about Sonakshi´s eyes, just lot less good than last time...... There is nothing fresh about the film. It is probably the most boring masalla movie I´ve seen in the past few years. And the thought there is supposed to be Dabangg 3 does not fill me with any excitement whatsoever.

To say something positive: performances are good, direction too isn´t bad, and there is nothing that would offend anyone´s sentiments I feel.

No fun, no twist, no originality. Dabangg 2 is not worth being an heir to the original.