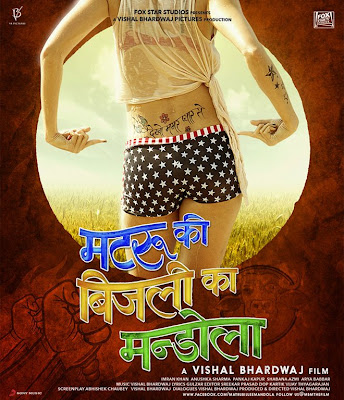 A film about..... nothing interesting really. It touches fleetingly a love story between two young people from different social background, as well as corrupt politicians, greedy businessmen and voes of the poor. But apart from a fabulous Pink Cow this film has no original, or even remarkably handled, ideas. Vishal Bhardwaj has over the years become one of those „reliable“ filmmakers, whom you associate quality and good cinema with. However this piece of cinema is to be a black (or mabye pink?) spot in his filmography.

The film is centered around a rich Mr. Mandola, who dreams to become even more rich by snatching the land from the villagers (in a village named by him) and turning it into an industry zone. He is supported in this by a mighty politician Shabana Azmi, and apart from helping each other professionally they are also fond of rubbing each other´s feet and whatnot. To make the connection more solid they decide their children should get married (anyone else felt this was kinda incestous?). But Mr. Mandola has a problem. He likes to drink. He likes to drink a LOT. And when he is drunk, he becomes a very sensible and very human person, even if a bit disoriented. He keeps sabotaging his own grand plans, and it doesn´t help that he hires a village hunk Matru to keep him from drinking, considering Matru is, in secret, trying to improve the lives of his fellow poor and eunuchs under a pseudonym Mao (in case you have not noticed he is a Communist – but to give credit where it´s due, he is not a caricature and is shown as someone truly believing the high ideals of Communism, while most films, especially Western ones, have Communists either as ridiculous, evil or equal to Nazis.)

Pankaj Kapoor steals the show. He is amazing. Both as a menacing and sober landlord and as harmless old man willing to give anything for a single bottle of beer, he nails the only 3D character in the film perfectly. I admired how easily his dialogue delivery and body language change as situation demanded. Together with Shabana Azmi, who is not her best, yet still very good, he puts the leading pair to shame. And the idiotic spoilt Baadal, played by Arya Babbar, is actually funny without trying too hard.

However now we must touch a more sore spots: Imran is neither good nor bad, because his Matru is anything but a complex character, plus gets surprisingly little screentime. He doesn´t have enough fire in him to come off as either a village loafer or a political idealist fighting for what´s right. Not even the revelation that he is in fact „Mao“ is presented in a way that would at least surprise the viewer a bit. It´s just random, just like gobber flying through the air and African dancers enjoying themselves in rural India. Anushka Sharma is extremely annoying and recycles her previous characters from Jab Tak Hai Jaan, Band Baaja Baraat and Patiala House (and the rest of her movies I forgot to mention), only once we get to her wedding finale she becomes good. I couldn´t help but noticing throughout the film she looks rather sick and ill though? In any case she and Imran don´t share much of a chemistry, and their relationship feels superficial.

There are several chuckle worthy moments in the film, but only a few and far apart. The film lacks script it seems, the plot is uninteresting, as it is really based on a situation that has been done to death previously, and with more success.

Unlike many I actually did like Vishal Bhardwaj´s 7 Khoon Maaf, for which he got a lot of flak, and many were expecting him to return to a better track with Matru Ki Bijlee. But instead this film reminded me why I genuinely think of 7 Khoon Maaf as a fine and entertaining film. It had good dialogues, it had a very unique and exciting atmosphere. It was overall brilliantly acted. It had fascinating heroine and progressive plotline. In other words everything Matru Ki Bijlee lacks. It does have the fabulous Pink Cow though.