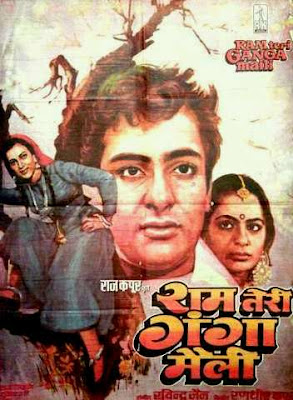 Will there ever be another man or woman who could reach the level of Raj Kapoor´s story telling? Because had it not been for Raj Kapoor, Ram Teri Ganga Maili just might have been a whiny story with two non-actors, one of which is not even an eye-candy. But it was Raj Kapoor on a director´s chair, and he did manage to create yet another beautiful, though not flawless film.

Disgusted by his rich and corrupted father (and oblivious to pretty Divya Rana´s feeling), Narein (Rajeev Kapoor, who looks very much like his older brother Rishi, yet lacks his charisma and talent) joins a group of young men traveling all the way from bustling with life and filth Kolkata to Gangotri and place where the river Ganges/Ganga begins her journey. Keeping in mind a promise given to his loving grandmother, Narein brings along a jug with an intention to bring clean and unpoluted water of the holy river back home for her. Almost instantly upon his arrival he meets a local village girl Ganga (Mandakini, looking more Russian than Indian with her Slavic bone structure and blue eyes), and both young people are instantly attracted towards each other. 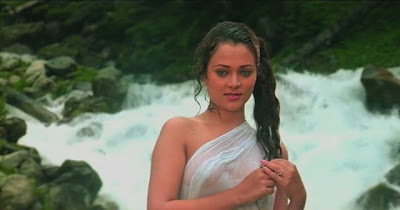 So much that they actually get married according to a tradition of Ganga´s people and engage in pleasant nightly activities. Alas, Narein has to return home, but promises his kind-of-wife to return for her. Alas, alas! The family meanwhile fixed his marriage with rich and pretty Radha (already mentioned Divya Rana). Alas, alas, alas! The news about Ganga shock Narein´s beloved grandmother so much she dies. And Narein is stopped from going back to Ganga by Radha´s influential father, who is determined to ensure his daughter´s happiness by marrying her to Narein. Thus Rajeev Kapoor, a boring hero if there ever was one, becomes sad. And stays sad. 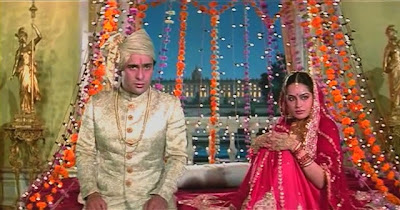 Meanwhile Ganga gives birth to his son, and to ensure he grows up with his father´s name she decides to look her kind-of-husband up. And with nothing but her baby and utter naivity she sets out on a long journey, that actually makes it seem everybody in the world wants to rape her, and she ironically finds shelter in a kotha. Indeed, Narein teri Ganga maili ho gayi..... 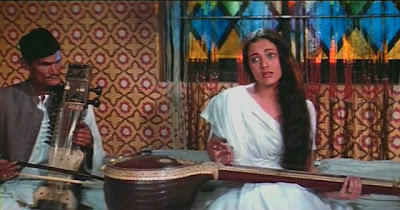 Mandakini and Rajeev Kapoor were two non-actors, and it actually played to their advantage they were both so talentless, so they actually fitted together well. At least Mandakini has a certain X_factor, a screen presence, and she is definitely the life of the movie. The tale itself gets a bit tiring in the second half, with hero sitting at home and heroine meeting various creeps, but the finale was definitely worth all that, even if only for the wonderful Radha/Meera´s love comparism in a song. Music of the film is brilliant overal, and this last song has to be a crowning jewel. 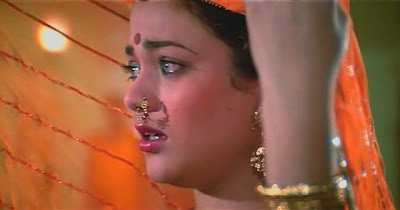 Ram Tera Ganga Maili, skillfully drawing parallels between the holy river that is polluted by sins of others and a girl Ganga, polluted by pretty much the same source of dirt, is also (in)famous for the semi-nude and completely-nude scenes that would be shocking to many even today. Raj Kapoor, after all, liked to show female body (remember Zeenat in Satyam Shivam Sundaram or even Simi Garewal´s booty in Mera Naam Joker?). Yet it is again a part of Raj Kapoor´s art that the nudity never seems out of place or vulgar. It is not there to lure anyone into Mandakini´s lap (makes me think if she was actually cast because no other actress agreed to reveal herself as much?), it is not there to shock. It is used to show her purity, her acceptance of the natural part of life. And I loved that. I loved pretty much everything about this film. 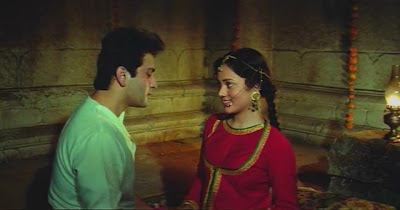