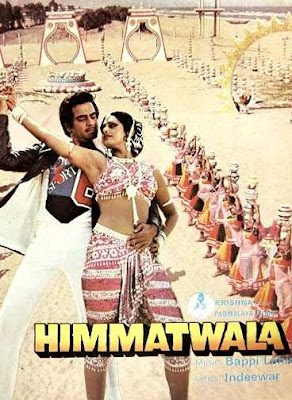 Classic by the influence it had on the fashion of filmmaking at its time (which kind of explains why 80s mostly sucked), and one damn overrated film when it comes to quality, Himmatwala is better to be avoided, unless you are in mood for a boring heroism of a ridiculous hero, some bad acting and unintenionally hilarious tragedies. Himmatwala also failed to give me what I wanted: Sridevi. Because ironically, although this is the film that catapulted her to stardom practically overnight, she has next to no role and 80% of her screentime is focused on her waist-down. And she is no miracle in the film either, in spite of her undeniable screen presence.


But let me introduce you our hero first. He wears the coolest 80s fashion, he sports the awesome Elvis haircut, his name is Ravi and he is definitely too old for the role. After years he spent studying he got his degree in engineering and now returns to his village. He is shocked to find out his mother (who in real life happens to be just six years older to him – and that she is my beloved Waheeda Rehman makes this crime even more horrible) and younger sister have sold their house long time ago and are living like beggars in dirty huts. Why? Here the sob story: Once upon a time his father was a respected school master, but after he testified against local rich villain Sher Singh he was trapped by him and accused of a rape. He is ostracized and leaves his family without a word. (and Ravi apparently suffers from amnesia, because he doesn´t remember a thing from all this, in spite of being at least 7 years old at the time). The broken wife of the teacher decides her son should become a big man by studying in the city (while her daughter is obviously not good enough and can happily slog and live in poverty.) 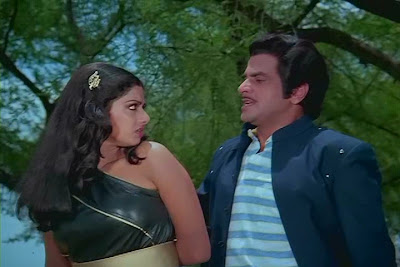 So now the village is completely under control of Sher Singh (who has a really bothersome and IMO needlessly complicated way of killing his enemies, involving railtracks) and on mercy to a whim of his spoilt and pretty beti (this is where Sridevi´s leather pants make an entry). But Ravi is not afraid! Ravi is and educated man capable of beating anyone up with his hands as well as never ending motivational speeches about duty and righteousness, that will make your head ache. And then... you guessed it. Ravi triumphs over Sher Singh, turns his daughter from a spoilt kid in leather pants into a Sati Savitri wrapped exclusively in sarees and lives to see the day his father returns home. Meanwhile he saves India from post-flood apocalypse, giving us a song with... corpses. 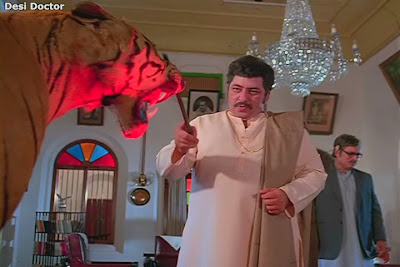 Jeetendra I just don´t get. Every film I´ve seen him in I found his a very bad actor. No dialogue delivery, no screen presence, no body language. And as already mention, too damn old to be a fresh graduate running around the trees with a child-like Sridevi. She in her turn does what the director wanted her to: making silly faces and speaking in squeeky voice. It has been proven lots of times she is capable of so much more, but sadly this “cutesy” act became her main image. To give credit where it´s due her Naino Mein Sapna dance number is a highlight of the film, and really addictive. Rest of the songs left me rather cold (except for Taki O Taki, but I´d rather not mention Jeetendra and his “jumping Jack” dancing style) and Wah Wah Khel has to be one of the most retarded songs and picturizations I´ve ever seen. 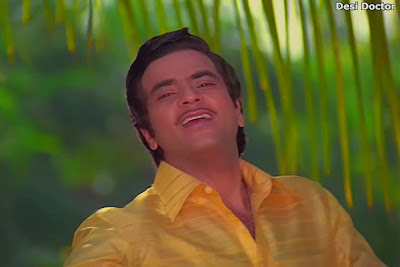 Supporting cast boasting of great names like Amjad Khan, Waheeda Rehman and Kader Khan, don´t leave much of an impression either. Amjad is not a scary villain in this (what a contrast to Gabbar from Sholay!), and why Waheeda did this film, being as picky and generally having a good script sense, is beyond my understanding. Apart from making me loathe the name „Ravi“, Himmatwala showed me that some films just cannot last in the long run and don´t stand the test of time. I don´t think Himmatwala has anything timeless and transcending the years. I would only recommend it to die-hard Sridevi fans, and that too purely for research purposes. Better go and watch the iconic Naino Mein Sapna on youtube and that on repeat (at least her dancing ability was fully put to use!). I am largely sceptic about remakes, but frankly, I think the new Himmatwala, that will be here soon with bells-swinging Ajay Devgn (also too old for the role. Meh.), can only be better. 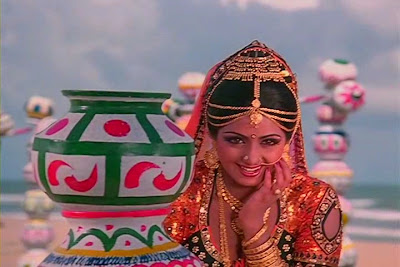