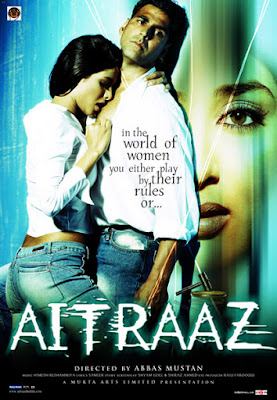 Few films are as problematic for me as Aitraaz. On one hand it seemingly adresses the issue of male rape and false accusation, on the other hand it outright condems women who are ambitious and demonizes statements which, taken out of context of the movie, are true and should be respected (i.e. This is my body and my decision if I have a child.) However what could have been a good psychological drama ultimately twists and turns and becomes a clichéd glorification of „traditional Indian values“ in opposition to wicked western ideas of sexual independence. Mind you, Priyanka Chopra´s character, the bearer of the „western“, is unlikeable and definitely the worst example of any culture one might think of. She is shown as highly manipulative and vengeful. Still I resented how she was made an unredeemable demon, while Akshay Kumar an innocent angel. But as the poster suggests, it is a „women´s world“ and men who do not conform suffer (ha!).

Whereas Priyanka in the film never gets a chance to elaborate on her motivation (unless one is ready to accept she is simply a basic and greedy bitch), Akshay plays the martyr with the help of the law-student-turned-domestic Kareena Kapoor (with really weird blond hair). His character, though, makes few questionable moves himself. He lies to an unknown girl because he likes her. He deceives her to win her affections. Fortunately for him she finds it cute and loveable, had it been me he would have a shoe in his face. He has a history of hitting women when angry. Upon Kareena introducing herself as Priya Saxena he only manages to stammer „Priya Sex.“ In other words veritable Prince Charming.

Alongside this suffering Romeo, Priyanka and Kareena represent the already mentioned two poles – the devil in anything not sanskaari versus Indian goodness, innocence and tradition. Heck, Kareena is even FULLY clothed while dancing on the beach, while bacground dancers are in bikini. The greatest difference between them however lies in their reaction towards pregnancy. Kareena is happy. Priyanka gets an abortion. One would have though that by 2004 Bollywood has outgrown the formula of the angelic/devious extremes, but unfortunately that was not the case.

On the whole Aitraaz comes as awkward. From Kareena´s hair colour to Priyanka´s seductive rolling on the floor. And the whole choreography. In the end I cannot shake the feeling that the whole movie did not really care for exploitation of men, and only used it as a veil for yet another film that demonizes women. The double standarts set by Akshay´s character are obvious too. He has no problem with oggling over a bikini-clad woman on the beach, but is insulted when other men react similarly to her when they see her photoshoot. Maybe I am wrong. That´s why the film remains problematic. Even if it was not, however, it would be a mediocre venture, with outdated sets, forgettable music, sloppy script and half-hearted performances. The only one truly into the character was the vamp - Priyanka Chopra, whose acting chops were not great back then. She is utterly beautiful in the movie still, and already showing the future Priyanka, who would not be shy of experimenting with her roles by taking a negative lead.