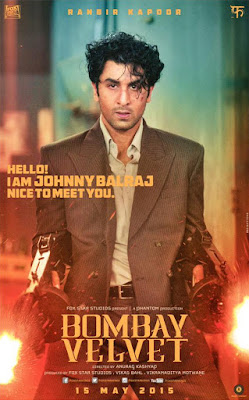 It was supposed to be larger than life movie, the new triumph for Ranbir Kapoor. It was supposed to wow the masses and gather laurels from the critics, and Anurag Kashyap was supposed to be basking in tsunami of appreciation. It was not to be though and Bombay Velvet, boasting of unheard-of amount of money poured into it, took leave of the cinemas way too soon for any profit. What went wrong? How come all the heralded opulence failed to attract the crowds? Perhaps the lengthy story telling was partly to blame, but truth to be told, this is another of those famous flops which I personally was intrigued to watch.

Bombay Velvet is sure interesting. Different. It takes the outline of some of the popular tropes, but then strips them of their basics. And so the main protagonist Johnny Balraj (Ranbir Kapoor) is one of those ill-treated children from the streets, rising to opportunity through the wrong means, but unlike so many heroes before him he does not have an ailing Maa and nobody raped his behen, nor a dead Petaji to avenge. Indeed, there is no excuse for his damnation-worthy lack of values, which teach us that it is better to starve than to get involved in any dishonest deal. Johnny could not care less. He wants to be a “Big Shot”. He is ruthless, but not completely without conscience, and what he does best is really to look after himself. Perhaps that is the source of conflict that has arisen in the viewers´ minds? The hero is actually no hero. His desires are common and average, and Johnny actually does not act out of ordinary in any way. I mean, sure, he sometimes kills a person or two, but given his “job” and circumstances, isn´t this how most people would behave. Johnny does not even have any super quality. He does not outsmart the smart ones, he does not break tables by punching twenty villains at the same time. To me Johnny Balraj was really just a simple crook with dreams that were not even that big. Just give him some dirty izzat, some money, the girl he loves and he´ll be just fine.

Ranbir Kapoor as Johnny is quite brilliant, as usual, changing in front of the camera yet again, as easily as chameleon changes colours. There is not a single moment when you wouldn´t think of him as the character, his body language, his intonation, everything is on point. Performances are strong overal – for the first time I was truly impressed by Anushka Sharma. Once I decided to ignore her infamous lips, I was drawn to her silent force. Indeed, her eyes did all the talking for most of the film. But she too is atypical heroine. Far from virginal, far from lamenting her fate, she does not expect a hero to rescue her from her plight, and once she actually finds a guy who genuinely loves her, she throws any previous obligations out of the window. And she has very few regrets. Sadly her re-introduction as Rita is one of the most bewildering and puzzling decisions one could think of, marring the logic of the movie.

The surprise package of the movie has to be Karan Johar. Previously known on the big screen as “the nerdy friend from DDLJ” he cuts a very decent villain, in spite of his feeble voice, there is nothing cartoonish about his. He generates enough threatening feelings for the film to run smoothly ahead. The one walking away with the short stick is Raveena Tandon, who appears without reasons during two of the songs, all covered in peacock feathers. Lots has been promised as far as the sets, costumes and visuals go, and while everything seems appropriate, fitting, I never had the larger than life feeling which I get when watching anything Bhansali. In fact most of Anushka´s outfits seemed in bad need of fixing, some looked simply cheap. I actually had to wonder where all the money went...

When Bombay Velvet promos first appeared, people kept blasting them, saying Ranbir is merely hoping for his own Agneepath. Bombay Velvet is nothing like Agneepath or any other film in that vein. There is no redemption, no justification. For all the megalomanic claims it remains a touching, interesting, but believable story about normal people on the darker side of the society.