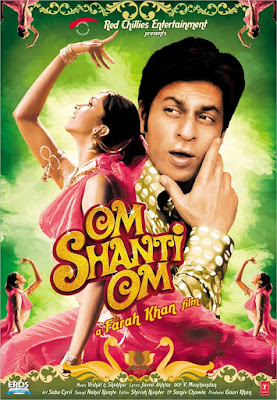 While I do not hold Farah Khan in high esteem as a director, she did something remarkable and created a film which has been terribly important in my personal Bollywood journey, and so enjoyable that it easily ranks in my top ten Indian films. Om Shanti Om is like a gigantic puzzle box. There is truly everything you may ask for in a film – puppy love, eternal love, slapstick humour, subtle humour, tragedy, action, memorable dialogues, great soundtrack.... and when it all comes together it just clicks and works wonders. Nothing speaks more in favour of the film that even though it is stuffed to the broom with film-references and making good-natured fun of the style of Indian filmmaking, it has become my number one choice of recommendation whenever Bollywood beginners ask me to show them a film. They know nothing about Bollywood, yet all of them like Om Shanti Om with all the quirks and in spite of not understanding any of the underlying jokes (and having no idea who that bunch of people randomly appearing in Deewangi Deewangi are).

Shahrukh Khan is allowed to over-play his already dramatic antics and as a result we get two delightfully different, yet both completely over the top heroes: Om Kapoor the goofy, star-struck movie fan, who lives only for his dream of becoming a star and gaining love of the gorgeous Shantipriya, the dream girl of the silver screen; and Om Kapoor the spoilt brat and arrogant actor who takes everything for granted. They only really become one and the same person as they near their destiny – the goofy bubble-gum 70s Om finds his doom in flames, that also shockingly take away Shantipriya, the irritable 00s Om upon realizing that he has unfinished business from his previous life. His over-dramatic acting is spot on and exactly what the film needs. And Dard-E-Disco is the greatest item song Bollywood has produced and you cannot tell me otherwise, capturing both the fun and ridiculousness item songs stand for.

I could not but oogle over Deepika Padukone (and her stunning, stunning wardrobe throughout the film), who, though dubbed, gave a very confident and good debut performance. Her expressions and eyes speak a language of their own, even if the voice is not hers. She is glamorous and perfect as Shanti. The whole supporting cast is apt and excellent, Arjun Rampal giving you the necessary creeps, Kirron Kher both amusing you and breaking your heart as typical filmi Maa, Shreyas Talpade with his adorable and undying support to Om´s dreams. Not to mention all the array of stars and superstars who agreed to do a cameo. The whole Filmfare awards bit was utterly hilarious also thanks to impeccable comic timing of Abhishek Bachchan and Akshay Kumar. And how heartening it was to see Rishi Kapoor and Subhash Ghai, who “opened” the whole film, fighting over a microphone? That is one of those golden moment that make Om Shanti Om so endearing.

The film is visually opulent, nothing short of Bhansali level of opulence actually. The aesthetics of it appealed to me greatly as they stem from my beloved Art Noveau, which gives for example the green-rooms corridor almost a fairy-tale look. Another wonderful thing are all the beautiful painting by Alfons Mucha on the walls. The songs are skillfully choreographed and also magnificent, from romantic randez-vous in a film studio for Mein Agar Kahoon, to fabulously theatrical Dastaan, clearly inspired by the big masquerade scene from the Phantom of the Opera. And they are all beautiful. Except for Dar-E-Disco which is not beautiful, but totally fab in its own right as mentioned above. The lyrics “Now I am a wanderer, and a lover of disco, as I wander around London, Paris, New York, L.A., San Francisco!” are a true gem.

As you can already tell, I adore this film. I dare to go as far as to compare Om Shanti Om with another Bollywood extravaganza – Amar Akbar Anthony – even though the latter is without doubt on a whole another level of iconic. The right mix of stuff that ranks from touching to pretty much crazy, with logic loopholes that one couldn´t care for any less, since it is simply all just too much fun. It is a well known fact that Om Shanti Om is an unofficial remake of Karz, which in turn was a remake of Madhumati, all films dealing with the themes of revenge “from beyond the grave”, with reincarnation being the turning point. It is also remarkable that unlike another set of remakes (based on the trope of separated twin siblings), all these films are memorable and great. Farah Khan simply took the story and filled every scene with potshots on almost every aspect of Hindi films. However these are all taken with much love and never even border on insulting. Om Shanti Om is both a parody of Bollywood and at the same time appreciates most of what makes it distinct and special.